Essendon are optimistic they can still secure a deadline deal for Bobby Hill, having offered their future second round pick to Greater Western Sydney as the Giants face a decision on the final day of the trade period over whether to hang on to the contracted small forward who asked to be traded to the Bombers.

However Collingwood remain eager onlookers to the Bombers-Giants negotiations, having met with Hill and made him a contract offer at the weekend. Hill had been open to a move to the Magpies before then deciding on the Bombers. 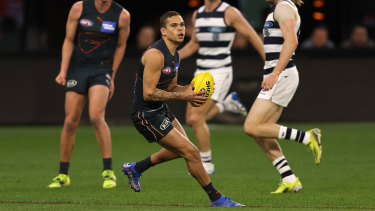 Hill shapes as one of the headline acts as trade period enters it final hours, with a clutch of players remaining in limbo, including Jordan Dawson, who is at the centre of a stand-off between Adelaide and Sydney, and Jordan Clark, the speedster over whose value Geelong and Fremantle are at odds.

Earlier on Tuesday GWS list manager Jason McCartney said on the AFL website it was “highly unlikely” Hill would be traded and that he had spoken to the player to prepare him for the likelihood he would return to the Giants next year.

Essendon then made the offer of the future second round pick for the 21-year-old who was taken at pick 24 in the 2018 draft, although the Bombers want the Giants to offer a later pick in return as part of the deal.

There was positive dialogue between the Giants and Essendon on Tuesday in relation to Hill, who wants to join the Bombers on a four-year deal.

Dons sources indicated that the Bombers remained keen to land Hill, and confident of doing so.

The Magpies have spoken with GWS about a possible trade if the Giants were prepared to move Hill and a suitable deal could not be struck with Essendon. Collingwood had been very keen on bringing in delisted Adelaide small forward Tyson Stengle until recently.

A deal to send Clark from Geelong to Fremantle is at a stalemate, with the Cats wanting either Fremantle’s pick 19 or pick 22 if combined with a third round selection, however the Dockers are standing firm that only pick 22 is on offer.

Clark is contracted and the Cats are prepared to retain him for 2022, holding him to the final year of his contract as they did with Tim Kelly at the end of 2018. However, Kelly played every game in 2018, whereas Clark has not been able to cement a spot in the Cats’ line-up.

Fremantle were adamant on Tuesday that they will not make a last-ditch play for a big name like Lachie Neale, Stephen Coniglio or Tom Mitchell, despite having a glut of picks and some cap space, suggesting that their sole major involvement on deadline day will be for Clark. 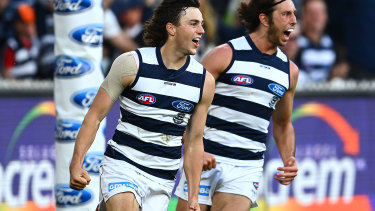 Jordan Clark of the Cats celebrates kicking a goal.Credit:Getty Images

Brisbane expect to land Cats ruckman Darcy Fort before the trade deadline but Geelong want more than the Lions’ picks in the 50s.

If Fort does leave then Hawthorn ruckman Jonathon Ceglar is likely to join the Cats, who have made it clear they need a back-up ruckman for 2022.

Hawthorn are waiting for those deals to occur before finalising discussions with Collingwood to trade in Max Lynch, who is a required player at the Magpies if a deal is not done.

Adelaide are holding firm that they will not include pick four in any trade for Dawson, offering instead the future first round pick (tied to Melbourne) that they secured in this trade period already as being sufficient compensation to get a deal done.

Sydney want a swap of picks in the 30s to sweeten the deal, with the Crows giving up 33 and getting 39 back. But Adelaide are adamant only the future first round pick is on the table. While the Swans had threatened to allow Dawson to walk to the pre-season draft, the club is increasingly resigned to taking a pragmatic approach, even though they are of the view that Dawson is worth a top-10 pick.

Sydney, meanwhile, is also trying to negotiate a trade for Port ruckman Peter Ladhams, with the Swans confident of a deal getting done for the big man, who is contracted to the Power next year.

AFL trades 2021: Stay across the moves, news and what it all means as our Real Footy newsletter goes daily for trade period. Sign up to get it here.