NSW Police have confirmed a disciplinary investigation is ongoing into the conduct of a detective involved in the sexual assault case against St George Illawarra player Jack de Belin.

The Wollongong detective, Shawn Adams, was strongly criticised by Judge Andrew Haesler for his conduct in the investigation but the District Court judge ultimately allowed the case to proceed to preserve public confidence in the legal system.

The Wollongong trial ended in a hung jury, and at a second trial in Sydney a jury found both de Belin and co-accused Callan Sinclair not guilty of one count of sexual assault against the 19-year-old woman. The jury could not reach a verdict on the remaining four charges, leading the Director of Public Prosecutions to not proceed with a third trial.

A spokeswoman said of a NSW Police Professional Standards Command enquiry into the conduct of Detective Senior Constable Shawn Adams: “As the investigation is ongoing we are unable to provide more information.” On March 10, Detective Sergeant Ryan Anning of the PSC Investigations Unit confirmed in an email to the Sinclair family an investigation of police conduct was proceeding.

Judge Haesler said Detective Adams acted with “reckless disregard” for accessing information which he was not entitled to view and should have “benched” himself from the investigation into the alleged rape of a then 19-year-old Wollongong woman.

However, Judge Haesler granted Adams a section 128 certificate protecting him from self incrimination, saying, “Police illegality cannot be countenanced but police illegality of the type shown here cannot be allowed to end the trial process.” 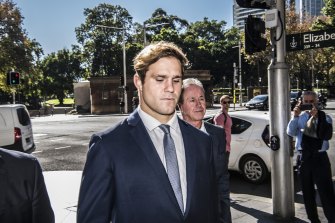 Detective Adams took stress leave, delaying the start of the Wollongong trial, with the case against the two defendants taking two and a half years to resolve. Depending on the outcome of the investigation, Detective Adams could face termination of his employment, demotion or censure.

De Belin, a NSW State of Origin player at the time, was stood down by the NRL under its “no fault” policy, missing two seasons of football.

The ARLC’s policy automatically suspends a player facing a charge that carries a potential sentence of 11 years jail.

RLPA chief executive Clint Newton has told the Herald that a review of the NRL’s no fault policy will be part of the forthcoming CBA negotiations. 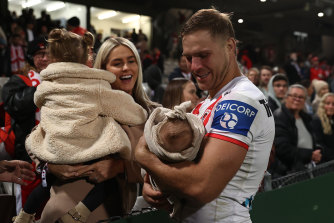 The Dragons extended de Belin’s contract to support his family with the caveat it would be torn up if he was found guilty.Credit:Getty Images

“The entire integrity system needs a thorough review and overhaul, along with its processes and procedures, which include the no-fault stand down policy and the player contract registration process,” he said.

“Why, on something as significant as denying someone’s employment, standing someone down from participating and derailing their career, would we not explore options for improvement? I’m yet to hear anyone come out and say the current system is perfect given the outcomes of particular trials since the policy was implemented.”

Only one NRL player, Jarryd Hayne, has been found guilty by a court following the ARLC’s decision to stand down players charged with serious offences.

The most recent player stood down under the policy, Melbourne forward Tui Kamikamica, played his first NRL game of the year at the weekend, after charges against him for assault were withdrawn. Other NRL players to have been stood down and subsequently not been convicted are Manly’s Dylan Walker and Newcastle’s Anthony Milford.

Walker was found not guilty of assault occasioning actual bodily harm and common assault of his partner Alexandra Ivkovic in 2019.

Milford was charged with three counts of assault occasioning bodily harm and one count of wilful damage. In April he pleaded guilty to one count each of public nuisance and wilful damage, but the assault charges were dropped after prosecutors said they could offer no evidence.

Newton said, “To the best of our knowledge, no one contemplated delays in court proceedings such as pandemics or hung juries. To be fair, given the speed in which the policy was introduced, you’re bound to miss some things, which is why it’s pure common sense to review the policy.”

However, an NRL spokesman said of a policy which protects its commercial interests, “The Commission is not reviewing the policy.”

St George Illawarra extended de Belin’s contract, partly to help pay his $1 million-plus legal fees as well as provide for his wife and two children, with the understanding his contract would be terminated if he was found guilty.

The Sinclair family are in the process of selling the family home to pay for Callan’s legal expenses and he no longer plays rugby league for his local club Shellharbour.

While the de Belin and Sinclair families believe their sons were dealt unfairly with by the media, the NRL, and a flawed police investigation, the consequences for the young female plaintiff are unknown. She is believed to have left NSW to live in another state.

The ramifications of sexual assault cases extend well beyond the courtroom.