SUTTON: Round one goes to Man City but there's a long way to go

Minor premiership winners Melbourne headline the names in the All-Australian squad, with the Demons having seven of their side’s stars among the 40 players in the running to make the final 22.

The Brisbane Lions are the next best represented side with five players, while 21 players in the squad have never been selected in an All-Australian side. 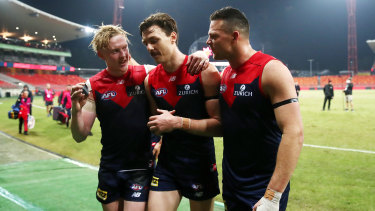 In the mix: Clayton Oliver, Jake Lever and Steven May. Credit:Getty Images

There is also the possibility Lance Franklin could receive his ninth All-Australian selection when the team is announced on Thursday. This would be a record ahead of the likes of Gary Ablett senior, Gary Ablett junior and Patrick Dangerfield, who have made eight sides.

Dangerfield did not make the squad this year. Richmond, Collingwood and North Melbourne failed to get any players into the squad. Richmond only had one player picked last year when they won the flag.

Despite varying fortunes on the field rivals Essendon and Carlton both had three players picked apiece in the squad – Jake Stringer, Darcy Parish and Zach Merrett for the Bombers and Sam Walsh, Harry McKay and Jacob Weitering for the Blues.

Gawn would have five All-Australian blazers if he were to make the team while Bontempelli and Hawkins would have four.

“Under the format introduced in 2007, the All-Australian selectors were not asked to nominate the leading players in each section of the field – forwards, defenders and midfielders/rucks – but simply to name the best players of the season,” an AFL statement on the squad read.

“However, the final team of 22, to be named later this week on Thursday, August 26 as part of the AFL Awards, is selected as if to play a match.”

No medical substitute or 23rd man will be picked, however.

Port’s Aliir Aliir and Karl Amon, plus the Western Bulldogs’ Bailey Dale, Gold Coast’s Touk Miller and Freo’s Sean Darcy are among other players never to be picked in an All-Australian side.

*denotes never picked in an All-Australian 22