The Melbourne Football Club, the game’s oldest and holders of the longest stretch without a premiership, have never had such a team since that last flag under the great Norm Smith in 1964.

It is a team that has been brilliantly assembled over several years, and which has the kind of prodigious talent that could produce multiple premierships, although those of the red and blue hue will be happy with just one in a fortnight after so many letdowns, false dawns and failures. 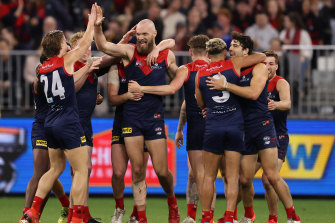 But there’s no reason to doubt this team, which has nearly every positional base covered and which shredded Geelong as if the Cats were a depleted bottom-four side.

The Cats were smashed in the contest, around the ball, and in crucial ground balls, in their forward line, in the middle, and down back. Melbourne’s chaotic style – get it forward, get it to ground, scramble, pressure and score – made Geelong’s controlling method obsolete.

Their defence melted in the face of Melbourne’s speed and ferocity on the deck. They were as embarrassed as a team can be in a final, as outclassed as the doomed, plucky Demons were in grand finals under Neale Daniher (2000) and even John Northey (1988).

Melbourne have had great footballers in their decades of failure, and those years under Daniher and Northey when they were, contrary to the club stereotype, blue collar and without sufficient class. Robert Flower, Stan Alves, Gary Hardeman, Garry Lyon, David Neitz and, for a fleeting period, David Schwarz, were tremendous, but they never had enough teammates of equal calibre. 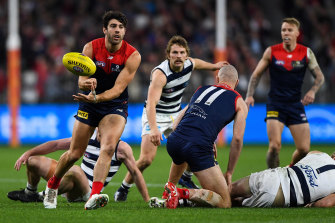 Christian Petracca gets a handpass away for the Demons.Credit:AFL Photos

This team, conversely, has enough talent that Jake Melksham can’t get a game, Nathan Jones isn’t in their best 22 and Michael Hibberd – excellent in defence in this game – was only called up because of an injury to Joel Smith.

If Christian Petracca was the most destructive player when the match had a pulse – his Dusty Martin-esque bull abilities fully expressed – and his midfield colleagues Clayton Oliver and Jack Viney excelled, as did Christian Salem and Charlie Spargo in the early hurly burly – there’s no question about the Demon who stood tallest on this evening.

Max Gawn’s four goals in the third quarter weren’t as crucial as the work he did in the middle in the first half, creating for Petracca and Oliver – the game was shot by mid-second quarter, if not sooner. But they provided the packed Perth stadium – and the disbelieving red and blue fans back in Melbourne – with a memory that will endure as long as the Demon drought. 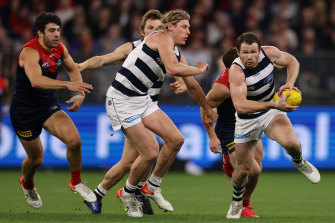 Patrick Dangerfield on the run for the Cats.Credit:Getty Images

Gawn’s four in a quarter were notable for the unexpected nature of each goal, for the variety of the way he scored them, for the array of skills displayed by a man who’s 208 centimetres.

And Gawn, surely the heir to Eddie Betts as the game’s most adored player from fans of all teams, became the figure who kept the nearly 60,000 getting out of their seats – Garry Lyon especially – when the outcome was long Gawn. For sporting fans of a certain age, this was akin to David Hookes belting five consecutive boundaries off Tony Greig in the Centenary Test of 1977.

Gawn had already nailed a tremendous long-range snap across his body in the first term, and then merely dominated in the ruck, before his third-quarter feats

His second goal was probably the most spectacular, as he ran from the centre square as if he was a 208cm Petracca and unloaded from 55 metres. His third for the quarter was almost as astounding – plucking the ball from a ball-up and snapping from an angle.

Then, he took a pack mark and converted. Not such a degree of difficulty, but something ruckmen hardly ever do in 2021. The only easy major was from a free against Esava Ratugolea.

Gawn’s combination of relaxed demeanour and ability to connect with a diversity of teammates – scallywags and the serious types, introverts and extroverts – has made his leadership a key element in turning a talented team into a team that believes. It was Gawn who challenged teammates to be selfless in the post-season of an underwhelming 2020.

They’ve got the players, with or without Steven May. They’ve got the momentum. And if they’re in Perth, they’re also sequestered, somewhat, from the hysteria back home.

If they weren’t called Melbourne, who’d bet against them?