Everyone knows the history – Melbourne’s is the longest VFL/AFL premiership drought, stretching back to 1964.

And the two grand finals the Demons have reached since then – in 1988 and 2000 – both resulted in smashings of the red and the blue. 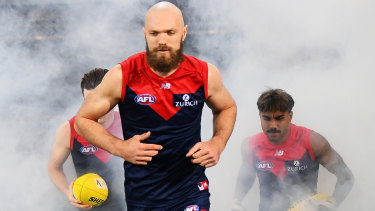 Max Gawn continues to lead from the front for the Demons.Credit:Getty Images

While it can’t be considered a curse, it’s a chapter of the proud club’s history that Simon Goodwin’s men are desperate to close.

And this is no false dawn.

In 2018 the Demons entered the season under the weight of huge external expectation and had to win through to the preliminary final the hard way. The result was a demoralising thrashing by the Eagles in Perth.

These Demons have a point to prove – that they have taken immeasurable strides forward since, and that they couldn’t be further removed from one of the darkest days in their club’s history, when they lost by an eye-watering 186 points to the Cats at Kardinia Park a decade ago.

Clearly, the 48-point turnaround the Demons’ way in round 23 is a contest that the Cats will be pouring over. Just how did they go from holding a commanding 44-point lead to lose by four? Clearly, as Chris Scott said later, the Cats had to do a lot right to build such a margin against the minor premiers, but the way the Demons charged through the gate the Cats left ajar has to remain front of mind for the Geelong leaders.

With their victory, the Demons claimed their first minor flag since their last premiership-winning season and they did so off the backs of All-Australians Clayton Oliver and Max Gawn, and the vastly improved Christian Salem.

But when it comes to finals lessons, when Scott is adamant that Geelong’s finals record over the past decade is only worth so much, he should be believed. 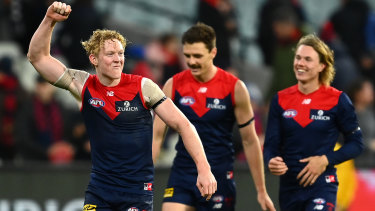 Clayton Oliver is one of the favourites for this year’s Brownlow Medal.Credit:Getty Images

Geelong boast battle-hardened warriors across all lines, and this week marks the 11th preliminary final the Cats have reached in the past 15 years.

Led by one of the best captains of the game’s modern era in Joel Selwood, and with the likes of Mitch Duncan, Patty Dangerfield, Tom Hawkins, Cam Guthrie, and Mark Blicavs falling in behind, they have every reason to be confident of returning to the grand final stage for the second time in as many seasons.

Esava Ratugolea’s role in the Geelong side hasn’t always been obvious, to the outside at least. Just where does he fit when it comes to the Cats’ talls?

He brings a physicality that his teammates – big and small – feed off, and his versatility, whether in the ruck or forward of centre, is a huge asset. Ratugolea was impressive in the Cats’ 2019 semi-final win over West Coast with three goals, playing all three finals that season, however he was left out of last year’s finals series. This time, a fit and firing Ratugolea is far too important to leave out.

For the Demons, much of spotlight will shine on Steven May, Jake Lever, Gawn, Petracca, and Oliver. But another who has the ability to swing the game his side’s way – with fewer touches of the Sherrin than any of them – is Bayley Fritsch. The sort of forward who could realistically kick five goals with 10 touches, he cannot be afforded time and space to let his creative streak run amok.

Geelong can’t allow May and Lever intercept-marking opportunities and they simply can’t allow the Demons to springboard into attack off half-back.

The scoring power of Coleman medallists Tom Hawkins and Jeremy Cameron speaks for itself, but just as important on Friday night will be their ability to keep May and Lever honest.

Equally important is the clearance battle and the Cats finding a way to quell the impact of Petracca and Oliver. As strong over the ball as anyone in the competition, it’s as if they finally believe they not only belong on the big stage, but that it’s their time to dominate it. The Cats don’t have to win the clearance battle, but they have to make it a scrap.

Melbourne deserve to enter this clash as favourites but Geelong won’t afford them the kind of space they did when they eased up at GHMBA Stadium late last month. Melbourne will win, but not by much.
Melbourne by 14 points.

The outpouring of goodwill headed to the Whitten Oval after the Bulldogs broke through in incredible scenes in 2016 for just their club’s second-ever premiership won’t soon be forgotten.

But neither will the way in which Luke Beveridge’s men are yet to be able to capitalise on that success.

Did they win that flag before their time? It’s impossible to quantify, but since that famous clash against the Swans, the AFL world has almost been waiting for them to return to that stage. It’s been a frustrating few years for the Doggies’ faithful after seeing proof of what those pups were capable of.

And frustration is something Power fans know all too well – that ‘almost’ feeling.

But this year, the men from Alberton are somehow more believable, despite finishing last year’s home-and-away campaign on top of the ladder, having led all season. They seem made of sterner stuff this time around, and that fire within doesn’t look to be easily extinguished.

It was only a few weeks ago, in round 23, that a vintage Travis Boak performance powered Port to a thrilling win over the Bulldogs that dashed the top-four hopes of Beverage’s men. The Dogs got the jump from the outset at Marvel Stadium, but Port wouldn’t be denied, and it was their former skipper who kept leading the charge time and time again.

In fact, to call it a ‘vintage’ Boak performance is to do him a disservice when he could rightfully lay claim to still being one of the competition’s best midfielders, even at the ripe old age of 33. The sealer came through Robbie Gray, one of the biggest clutch performers of his era. While the Power’s list has evolved significantly in recent years – with the likes of young guns Connor Rozee, Zak Butters, Xavier Duursma, Mitch Georgiades, and Willem Drew making a significant impact – it’s Boak, Ollie Wines, and Gray who remain ever-reliable. 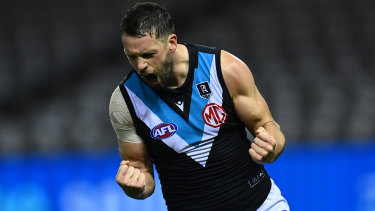 Travis Boak has had another exceptional season for the Power.Credit:Getty Images

That result meant the Bulldogs entered the finals off the back of three straight defeats – seemingly having peaked at exactly the wrong time of year. But then the elimination final came – against the young, upstart Bombers – and Bontempelli, Liberatore and their proven stars delivered one hell of a reminder of their own class.

There’s an element of the term ‘X-factor’ that implies a certain degree of unpredictability. But that could never be said of Bailey Smith. The Bulldogs’ brightest young cult figure has developed at such a rate of knots that he’s already one of their most crucial pieces – and one of their most dependable. The bigger the stage, the more suited to the spotlight he seems.

Both the Bulldogs and Power are stacked with elite young talent – some of the most exciting in the competition – but for the Power, Orazio Fantasia looms large. Even though he’s still only 25, he’s not exactly ‘young’ anymore in playing terms, but the oft-injured, mercurial forward has been all too often dismissed by many onlookers, particularly in Melbourne. His four goals from just seven kicks in the qualifying final against Geelong proves just how lethal he can be.

The battle of the midfield bulls is never more vital than at this time of year, and that’s precisely why Marcus Bontempelli’s possible absence could prove so telling. Wines and Boak have been among the competition leaders all season in the engine room, and Wines – along with Bontempelli – loom as Brownlow Medal favourites.

If Bontempelli was to miss with his knee complaint, so much more would be left to the likes of Liberatore, Smith, and Jack Macrae. 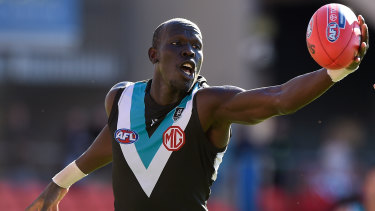 And it’s that battle in the middle that will prove most decisive when it comes to the kind of delivery Charlie Dixon and Aaron Naughton receive at either end of the ground. If the Bulldogs are to win, Alex Keath will need to play one of the games of his life.

Cody Weightman has been a revelation in the Bulldogs’ forward line and they’ll sorely miss his pressure as much as his goal-kicking if he misses through concussion. Forward pressure will be the key to stopping another Aliir Aliir masterclass.

The stars are aligning for the Power. They’ve positioned themselves for a genuine flag tilt through the imposing form of so many of their key pieces at exactly the right time of year. The Bulldogs’ wins over Essendon and Brisbane prove their finals prowess, but a win over the Power at Adelaide Oval – and potentially without both Bontempelli and Weightman – just seems a bridge too far.