Collingwood coach Nathan Buckley confirmed the pair would play, but Jeremy Howe's bid to return from a knee injury in 2020 looks all but over, with Buckley indicating it will be a bridge too far to get him back this season. 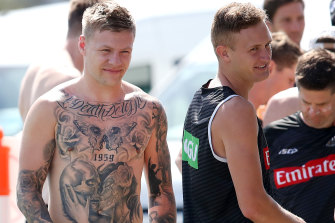 Jordan De Goey (left) is back for the Pies.Credit:Getty Images

The Magpies have had a stingy defence but have struggled at the other end of the ground with their scoring, with just one score above 70 points since round three. De Goey kicked five goals when he played in round seven before being sidelined with a finger tendon injury.

Buckley said Collingwood's lack of scoring was no secret and that De Goey adds "a different dynamic in front of the ball".

"If you can win two or three contests and kick two or three goals you are worth your weight in gold and Jordan has obviously got that capacity."

Midfielder Brayden Sier will also miss as he continues to overcome a quad injury suffered against Adelaide. He will not play in Saturday's scratch match against the Gold Coast and remains one or two weeks from returning.

"He has had his fair share of challenges from a body perspective. We know he has got the talent to play at the top level but it's a tough caper and Brayden is working his way throught that," Buckley said.

Howe has been attempting to get right for the finals in the team's Sunshine Coast hub but Buckley said the star defender would struggle to make it back this season.

"We haven't been planning for Howie for the most part but hoping he could beat the challenge in front of him, but it is more likely than not that injury will prove too much for him to get back," Buckley said.

Howe required surgery on a ruptured posterior cruciate ligament and Buckley said the club wanted the respected 30-year-old to be in good shape in 2021.

The Magpies need to beat the Suns to guarantee a finals spot, otherwise they will have to defeat top-of-the-table Port Adelaide in the final round, the match closing the home-and away season.

Buckley said the club was happy with the defensive aspects of their game but they needed to find some spark inside 50.

"That has been an ongoing battle for us, with the change of personnel not just in front of the ball but around the ball," Buckley said.

"We know they are the questions we need to answer. We have come up with a few answers that have not quite given us the bang for buck we are looking for but we have time."