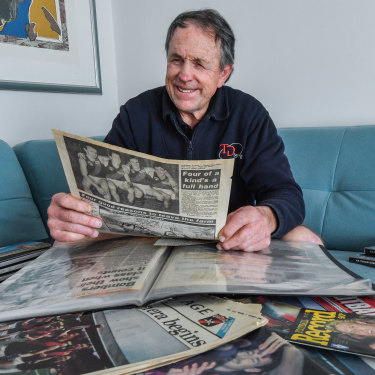 Terry Daniher with the clippings from that famous day he played with his brothers for Essendon in 1990.Credit:Joe Armao

The Daniher brothers are footy’s greatest bumper crop, between them playing 752 premium quality games spanning more than two decades. But only once did they appear all together. It remains the only instance of four brothers-in-arms in a VFL/AFL match. It will be 30 years ago next Tuesday.

The first thing you need to know is that they are as salt of the earth now as they were then, even the beleaguered Neale. Here’s one measure: I could count on one hand the sportspeople who have asked a solicitous question back at me in an interview. Four of them would be Danihers.

Terry, the eldest, played one game for Ungarie with his father, the also legendary Jim. It was a grand final. “We were playing Lake out at Tullibigeal,” said Terry. “It was windy and they were a bit good for us.”

Terry was 17, Jim 45. “He had a bung shoulder,” said Terry. “He got tipped over that year, otherwise he probably would have come back the next year. We won it the next year.”

Terry left for town, followed by Neale and Anthony. Back at home in the summers, Terry and Anthony would go for long runs on dusty roads. Chris, still in primary school, would try to tag along. “He was too small,” said Terry. “I’d tell him to stay home, but he’d insist. We’d get down to the end of the lane and I’d say: ‘You sit there til we get back’.”

Needless to say, the prospect of all four in a big league team was so remote then it didn’t come up.

But it was in someone’s mind. At Essendon’s 1985 premiership party, Edna, the boys’ mother, bailed up Kevin Sheedy and said: “I wouldn’t mind having my four boys all get together one day.” Replied Sheedy: “I’ll see what I can do.”

It was still far-fetched. Terry was Essendon captain, but the ill-starred Neale had done just his knee again, Anthony was established with the Swans and Chris was still in Ungarie.

That was Sheedy and Edna. There was nothing of her then and isn’t now, but it is all heart and go. “Dad was the technical guru,” said Anthony. “Mum’d give you the rev up. I copped it a few times.

“She’s a competitive beast. You see her on that tennis court … ”

In 1987, Anthony moved to the Bombers and Chris signed on. In 1989, Neale came out of the deep freeze for one last crack. Momentarily, Sheedy thought about playing all four in Terry’s 250th game, but the timing wasn’t quite right.

In May the next year, 1990, the stars suddenly aligned. A NSW team picked on broad criteria played Victoria on a rainswept SCG. Neale and Chris were plucked out of Essendon’s reserves to join Terry and Anthony alongside teenage North Melbourne prodigies Wayne Carey and John Longmire.

Incredibly, NSW won, Longmire kicking eight straight. “It was a ripper night, wasn’t it, Ants?” said Terry. “Coming up against the big V, you’re in awe of them. Thank god we got plenty of rain. That swayed it our way.”

Jim, a lifelong apostle for the cause of footy in NSW, said it was his proudest moment. Riverina blood runs in the Danihers still. Chris is back on the family farm and Terry can reel off the names of the Riverina graduates playing AFL now. 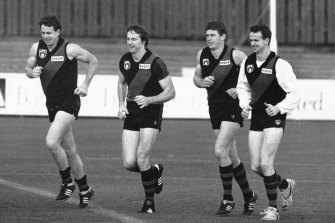 The four brothers at Essendon training in 1990 (from left): Terry, Neale, Chris and Anthony.Credit:The Age

Back in Melbourne, the fates were converging. In round 21, Essendon beat Footscray to clinch the minor premiership and Sheedy declared this team to be better than 1985’s world-beaters. Anthony was just back in the side after six weeks out with a broken jaw and Sheedy floated the possibility of promoting Neale and Chris from the twos for what was effectively a dead rubber against St Kilda at Moorabbin.

At the time, Terry cocked an eye. “You can’t just be putting players in to try and break some sort of record,” he said. “You’ve got to earn your spot.” Now he says: “That’s just the way it was.”

Saturday, September 1, match day, was a blur. Jim and Edna rose at 4.15am to catch a flight from Wagga at six. Terry, Anthony and Chris ran their own window cleaning business then, and Anthony remembers how fatigue would accumulate over a season. “I do remember walking into those rooms after a big week of work – stuffed,” he said.

Chris, then with only nine games under his belt, remembers being nervous. “It was just before the finals,” he said. “For me, it was nearly a final.”

The veteran Terry had more regular footy concerns. “You’re playing at Moorabbin,” he said. “They’re mad down there. They never let you come off the ground without a few bruises.” 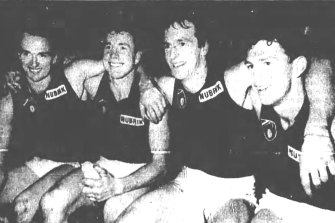 Together for one match only: Anthony, Terry, Neale and Chris Daniher after the game in 1990.Credit:The Age

From seven shots, Neale kicked 3.4, the silk still showing. “His brothers might have been looking after him a bit,” said Terry. Rejoined Anthony: “But he could handle a bit of mud on the footy, Teh?” Knowing nods followed.

Post-game, Sheedy presented the match ball to Jim, and said the Ungarie institute was more fertile than the Australian Institute of Sport. Perhaps some thought Sheedy was indulgent to play all four, but the great Simon Madden was not one. “I thought it was great for the club, great for the Danihers and great for the (other) players,” he told McNicol. “It won’t happen again.”

Indeed, it would be a poor club that did not cherish the best of itself, and here it was.

The Danihers celebrated with kith and kin at a Sandringham hotel. “The greatest feeling playing footy is to come off the ground after a win,” said Chris. “To do it with three brothers … it was very special.”

The post-script was an accident of fate. As minor premier, Essendon had the first week of the finals off. When Collingwood and West Coast drew their qualifying final, it became two weeks. There’s a fine line between a rest and a disruption, and somewhere along the way, the Bombers crossed it. By the second semi-final, some of their best hadn’t played for a month and the fizz was gone.

Anthony: “We got sick of training.”

Sheedy rang around for a practice match opponent. Fitzroy reserves volunteered, augmented by some of Essendon’s youngsters, but Sheedy abandoned the match after a quarter. “It did put everything out of whack a bit,” said Terry.

The Bombers eventually made their way through to the grand final. Sheedy considered putting the Daniher band back together again, but feared Neale could be blamed if they lost.

“I think there was a lot of pressure on Kev in the match committee,” said Terry. “For a finals side, you never get it the way you want it to look. A few of us were not in super top form.” In any event. Essendon lost heavily to Collingwood and that was that.

In one sense, the Danihers now went their separate ways. Neale did not play again after that Moorabbin match. The tribunal made an example of Terry after the grand final, suspending him for 11 matches. If it doesn’t rankle still, it’s only because he’s a Daniher. A mighty footballer, he played another two years, but with something visibly missing.

Anthony played out a fine career. Chris feels 1990 was the making of him. Seven more years of yeoman service to the Bombers followed, including a premiership in 1993.

In another sense, they’re as much a clan today as ever. Necessarily, Neale sits a little apart, but not in their thoughts. They all still love their footy without necessarily liking every aspect of it. “It’s too defensive for me at the moment, I’ll say that out loud,” said Chris.

Any footy’s better than none. “For those of us fortunate to have a bit of work, to be able to come home and sit down and have a look at a game of footy,” said Terry, “the AFL’s done a great job keeping it ticking over.”

Jim died last year, but Edna soldiers on. As each son retired, she gave him a suitcase stuffed with clippings compiled by her and her seven daughters, literally a bagful of memories. “Terry’s got the biggest,” said Anthony.

They don’t often reminisce. Pedestals are not their thing. “The girls remind us not to have big heads,” said Anthony. “That’s why you have sisters. They keep us pretty grounded.”