Luke Beveridge has used the Western Bulldogs’ interstate travails of the past month to cultivate a siege mentality, which has the Bulldogs one win away from yet another extraordinary against-the-odds premiership.

Having been agonisingly edged out of the top four by a tiny fraction of percentage after being in the top two for much of the season, the Dogs already had their work cut out to make the grand final from fifth.

Forced on the road by the Victorian COVID-19 situation, the Dogs overcame a partisan Essendon crowd to overcome the Bombers in Launceston in an elimination final, and it became tougher from there. Queensland health orders meant Beveridge’s men were largely confined to their hotel rooms on the day of their semi-final against Brisbane but edged the Lions.

The Dogs then flew from Brisbane to Perth before heading to Adelaide for a preliminary final against Port Adelaide, where they were denied the chance to train on the ground in the lead-up to the game, this time the doing of South Australian health authorities. And yet, the Dogs thrashed Port by 71 points to book a grand final spot against Melbourne at Optus Stadium on September 25.

The Dogs had momentary freedom in Adelaide on Sunday morning but face another week of quarantine in Western Australia before finally being let out a week before the grand final. 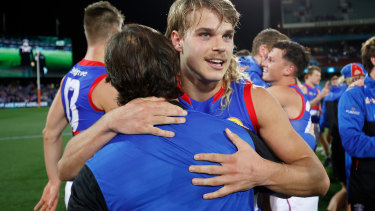 Luke Beveridge and Bailey Smith embrace after the preliminary final.Credit:Getty

But rather than become deterred by their challenging lot, the Dogs have used it as motivation.

“You realise you have to accept your circumstances as they come. You can’t really fight against it – it’s just wasted energy,” said veteran defender Taylor Duryea after the preliminary final.

“That’s what the group’s done really well – embrace each challenge, try to make the most of a bad situation and galvanise off the back of that.

“We look at it as though we’re the lucky ones out of Victoria, and we understand people back home are doing it much tougher. So, it’s been a good distraction for us.

“We’ve just got on with the job at hand and been focussing on playing footy on the weekend, whether it’s at home or on a tough road schedule.”

Critical to that constructive mindset has been Beveridge, who Duryea praised for his influential leadership during such turbulence.

“Bevo has made mention of all the hurdles and obstacles we’ve had to overcome as they’ve been presented,” Duryea said.

“I don’t think it’s healthy to dismiss or try to shy away from what’s actually occurring.

“You have to acknowledge and use the challenges that are being thrown our way.

“The group has been really good in the way they’ve handled it and Bevo has got a good way of connecting with the group with that.”

Star midfielder Bailey Smith told Fox Footy that the Dogs liked to defy the forces working against them.

“It was frustrating,” Smith said of being denied the chance to train at Adelaide Oval.

“But there’s something about us, when we get quarantine and stuff like that we almost do better sometimes. Bevo tries to make us use it as fuel and I think we did that tonight. We did it against Brissie, we did it throughout the year against the Perth teams.

“I think we use it as a strength almost, as fuel.”

Smith suggested that the Demons would go into the grand final as favourites.

“They’re a great side. We respect them a lot. We’ve got a little internal rivalry against them. We feel we’re the underdogs, and we want to take it up to them, so it’ll be exciting.”