Richmond chief executive Brendon Gale says Tigers captain Trent Cotchin has offered to pay the fine which was dished out to the club after his wife breached AFL coronavirus protocols on the Gold Coast.

The Tigers were one of four clubs fined in recent days for contravening the AFL's COVID-19 rules for players, staff and families based in AFL-financed hubs. 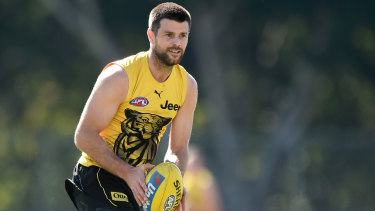 Toil and trouble: Trent Cotchin in training with the Tigers at the Gold Coast hub.Credit:Getty Images

Cotchin's wife Brooke breached the protocols by entering a beauty salon, leading to the Tigers being fined $45,000 of which $25,000 was suspended. Brooke posted about her visit to the salon on Instagram before deleting the post.

Gale tweeted on Sunday that the dual premiership captain had offered to cough up from his own pocket rather than members' money going towards paying the fine.

"We’re committed to doing all we can to ahere to the @AFL COVID protocols. It’s not negotiable! The inadvertent breach this week was disappointing (and Trent immediately offered to pay the fine). It’s a reminder of the fragility of the @AFL competition, and the entire community," Gale said.

Cotchin's offer is consistent with the actions of Collingwood coach Nathan Buckley and assistant Brenton Sanderson who paid the $25,000 non-suspended portion of the Magpies' fine for Buckley and Sanderson’s unauthorised hit of tennis with former Australian tennis star Alicia Molik.