Collingwood are planning for their players to wear special T-shirts at training ahead of next Monday night's clash with North Melbourne as the Magpies throw their support behind the movement to "free" the Australian Aboriginal flag.

The famous red, black and yellow flag will be missing from this week's Sir Doug Nicholls Indigenous Round after the AFL did not reach an agreement with WAM Clothing who, along with Carroll and Richardson Flagworld, hold a licence for exclusive use of the flag, pursuant to copyright arrangements with Indigenous artist Harold Thomas, who designed the flag in 1971.

A lobby group including Australia's first Olympic gold medallist and former Senator Nova Peris is pushing for the federal government to free the flag from copyright laws and make it available for all people to use without charge.

With the imprimatur of club director Jodie Sizer, who is Indigenous, the Pies have decided to lend their weight to the cause. Sources have indicated that Collingwood will train in "Free the Flag" T-shirts in a session before their date with the Kangaroos at the Gabba, which is the final match of the Indigenous round.

Collingwood's Indigenous veteran Travis Varcoe, and star defender Darcy Moore – who is not Indigenous – have also come on board as formal ambassadors for the cause.

The Pies have, meanwhile, unveiled their 2020 Indigenous guernsey, designed by Yorta Yorta man Ross Morgan Snr and his sons. 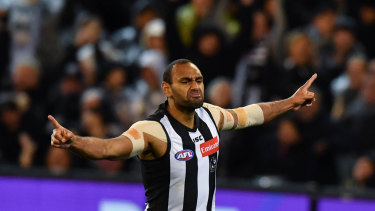 "The painting's story comes from one very special event, which we believe to be the first Aboriginal protest against unfair and inhuman treatment to our people by the then mission manager," Morgan said on the club's website.

"The Cummeragunja walk-off is remembered as well as the journey, strength and resilience of our ancestors and now elders."

The Pies' stand follows that of AFL players in round two, who “took a knee” and wore black T-shirts pre-game in support of the Black Lives Matter movement following the death of George Floyd in the US.

Collingwood's support for the cause comes against a backdrop of the club’s investigation into allegations of racism from 2010 premiership player Heritier Lumumba, who is of Brazillian and Congolese heritage.

The AFL confirmed on Sunday that the Aboriginal flag would be missing from the centre circles during games in this year's Indigenous round. The tri-coloured flag has in recent years been painted onto the middle of the ground. The word "Deadly" will instead feature in the middle of the ground, while the name of the local Indigenous population and the Torres Strait Islander flag will appear on the ground as well.

WAM co-owner Semele Moore said on Sunday that the organisation had given permission to the AFL for players to wear the Aboriginal flag on their jumpers, but not for them to be reproduced for sale. An agreement between WAM and the AFL over the use of the flag in the centre circles was not reached.

"As with the Indigenous round for 2019, we gave permission to the AFL for the Indigenous players to wear their guernseys on the field with the flag, and there was no issue there whatsoever, and that same permission would have been offered this year as well," Moore said.

"If they want to go sell those to the public, that's when there would have been fees payable."

The "Free the Flag" movement is driven significantly by Indigenous woman Laura Thompson, who runs Melbourne-based business “Clothing the Gap.”