On the same day Cronulla assured John Morris he was still in pole position to lead Cronulla in 2022, Cameron Ciraldo has approached Penrith about potentially linking with Craig Fitzgibbon as his assistant at the Sharks next year.

The Sharks held a crisis meeting with Morris and his manager Chris Orr on Monday morning following revelations in the Sydney Morning Herald that Fitzgibbon had all-but agreed to coach the club in 2022. 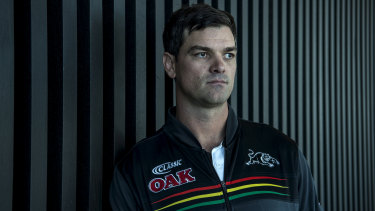 Cameron Ciraldo has approached Penrith about a potential release to join Cronulla in 2022.Credit:Steven Siewert

Cronulla officials insisted a decision hadn’t been made, with Morris and his manager leaving the meeting saying it was “positive and productive”.

Morris later returned to training, where he told players it was business as usual and to forget the elephant in the room.

As the Sharks met yesterday, plans continued to be formulated in the background around Fitzgibbon’s pending tenure. Penrith officials confirmed Ciraldo had approached the club, including coach Ivan Cleary, about potentially leaving his deal at season’s end to take on an assistant role with Cronulla next year.

Ciraldo, who hails from the Sutherland Shire, still has another year on his deal with Penrith as Cleary’s assistant. However it’s understood the Panthers will not stand in his way if he chooses to move on as part of a dynamic coaching duo. Sources close to the Sharks have also confirmed the club, or someone on behalf of the club, recently contacted Ciraldo.

Fitzgibbon and Ciraldo are regarded as the best two young coaches in the game. They are renowned for their efforts as the defensive coaches at the Sydney Roosters and Panthers respectively.

Sources close to the situation told the Herald Fitzgibbon informed the Roosters over the weekend of his intention to take up the role with Cronulla from next season. He is expected to sign a three-year deal worth between $1.5million and $1.8million.

He is waiting on a commitment from the club in regards to his coaching staff next season, after a guarantee from the Sharks that he will be given autonomy over the make-up of his staff before putting pen to paper. He also wants to meet face-to-face with Sharks officials before signing the deal.

Fitzgibbon, a Roosters life member, last year turned down approaches from the New Zealand Warriors and St George Illawarra after promising coach Robinson and chairman Nick Politis that he would not leave his role before the end of the 2022 season.

Brad Fittler, one of Fitzgibbon’s closest friends, said he had no doubt Fitzgibbon was in line for the job.

“He works very hard, knows the game back to front and he loves the game,” Fittler told NRL.com.

“He’s got an affiliation with the Cronulla area. He lived there for a long time while he was playing with the Roosters. He knows a lot about the fans and the supporters there. He’s done his apprenticeship under Robbo, one of the best in the business. He knows what coaching is all about … I have to say there are not many other people I’d trust more taking on a first-grade role more than Craig Fitzgibbon.

“He’s got to the stage where the right job has come up. There were some other options last year and he decided against them, I think wisely. It shows a lot of maturity and a lot of confidence in yourself to wait for the right job because they just don’t come up that often.”

As for Morris, his players have leapt to his defence. Injured and off-contract playmaker Shaun Johnson told Fox League he was disappointed with the club’s treatment of the coach.

“I look at the facts, bro. I don’t know how you can have a coach who has been throw in at the deep end right at the start,” Johnson said on The Matty Johns Show.

“He had to take over a difficult situation at the start with Flanagan leaving. He’s gone after it, taken the side to the finals the last two years and finds himself in the position he is now. It’s disappointing, certainly disappointing.”

Fitzgibbon’s coronation as an NRL head coach came with the support of a couple of the Rabbitohs’ biggest stars despite their rivalry with the Roosters.

Cameron Murray and Damien Cook have both worked with the 43-year-old during his time on Fittler’s NSW staff during the last two State of Origin series, where Fitzgibbon was charged with leading the side’s defence.

“I guess it’s up to him, but I have no doubt [he’s ready],” Murray said. “I can’t praise him enough as a coach or as a person. I love Fitzy and I think he’s up there as one of the best coaches I’ve played under.”

Said Cook: “He’s a very smart coach and knows what he’s talking about. If he does get a job there would be no one that deserves it more. He’s a great coach and I’ve really enjoyed the time I’ve spent with him.”