We look at what is being said as the Challenge Cup third round comes to a close on Sunday, with Warrington Wolves travelling to Swinton Lions and an all-Super League clash between Leigh Centurions and Huddersfield Giants…

The last time Swinton lifted the Challenge Cup back in 1928, completing a league and cup double in the process, the team they beat 5-3 in the final was Warrington.

Prior to this year though, their most recent meeting with the Super League side in the prestigious knock-out competition in 2011 saw them suffer a 112-0 defeat, with Lee Briers racking up 44 points alone for the Wolves.

Fast forward 10 years and the Lions meet Warrington at the last-16 stage again following wins over fellow Championship sides Newcastle Thunder and Oldham, and Swinton head coach Stuart Littler has reason to believe it will be much closer this time around.

“It wasn’t too long ago that Huddersfield got turned over by a Championship team,” former Ireland international Littler said. “A number of players will want to showcase their abilities against a Super League team.

“As a club, we’ve had a lot of success in the Challenge Cup and we’re very driven to do well this year.”

Warrington, who include former Swinton player Matty Ashton in their squad, come into this match as one of the favourites to lift the trophy in 2021 after doing so two years ago and reaching the semi-finals last year.

There will be no danger of them underestimating the danger posed by their lower-league opponents at Heywood Road though.

“Every year in the cup, there seems to be that one big upset,” Wolves full-back Stefan Ratchford said. “We’re definitely not taking it lightly – we are preparing as if it’s a Super League game.” Six months ago, Ian Watson was overseeing Salford Red Devils’ preparations for their first Challenge Cup final in over half a century. Now, he is fully engaged in his new role at Huddersfield.

The Giants take on Super League newcomers Leigh at Leigh Sports Village in the final tie of the third round on Sunday and Watson is naturally keen to return to Wembley with the six-time cup winners.

Huddersfield have not graced that stage since their defeat to Warrington in 2009, but the head coach knows they cannot afford to look beyond Sunday’s match.

“The first step we need to worry about is Leigh this weekend,” Watson said. “We have to deal with what’s in front of us at this moment.

“You have seen the way they started against Wigan. They bring something different coming from the Championship, which is a very physical league.”

The Giants have Jack Ashworth in contention for his debut, while Centurions head coach John Duffy is set to unleash two of his new recruits as well.

“Peats has trained all week,” Duffy said. “He brings a lot of energy and obviously a lot of experience in the NRL and State of Origin. 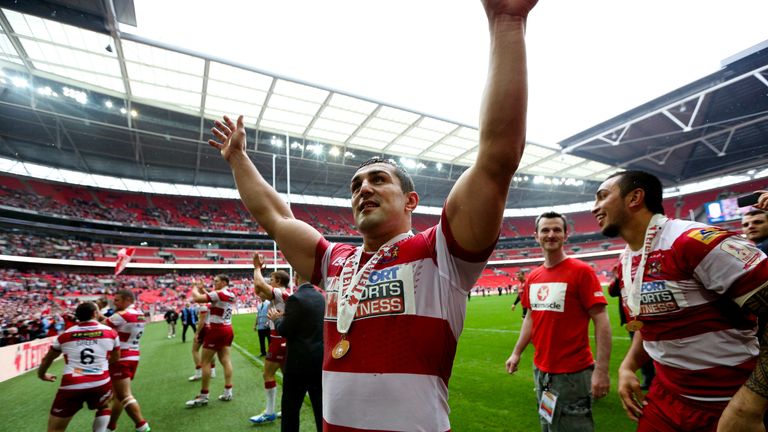 “Benny has been back for three weeks and he’s chomping at the bit, he’s killing people at training. He’s a great leader and hopefully he will show that on the field. He will be good for people around him.”