Geelong football manager Simon Lloyd says it is still too early to tell whether Rhys Stanley will be sidelined for the Cats’ clash against the Western Bulldogs next weekend, but the team has plenty of options should he miss.

Lloyd’s comments come despite coach Chris Scott describing Stanley’s knee injury as “medium-term” after the ruckman was subbed out during the second half of Geelong’s 12-point victory over Port Adelaide. 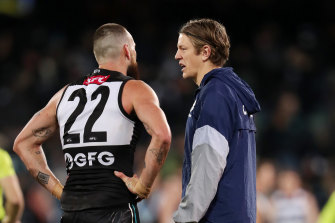 Rhys Stanley (right) was subbed out with a knee injury.Credit:AFL Photos

Scott said the injury would likely keep the 31-year-old on the sidelines “for a little bit,” but Lloyd said on Sunday that nothing was set in stone until proper tests and scans were completed, which he expected to take place on Monday afternoon.

“We basically give the medicos all the time they need, and the doctors all their time,” Lloyd said.

“Rhys hasn’t even had scans yet. We’re going to wait and hear what they have to say.”

However, Lloyd was confident the Cats would have plenty of options to replace Stanley in the ruck, should the injury rule him out, including Jonathon Ceglar, Esava Ratugolea and Shannon Neale.

“Between Jonathan, Esava and also Shannon, they’re all ready. That’s something we’ll need to discuss with the match committee over the coming week,” he said.

“They’ve all played adequate game time, and they’re all in good form. So, we’ve got players available if needed.”

Neale debuted in the win at Adelaide Oval on Saturday, while Ceglar and Ratugolea had a week off during the VFL bye.

Ceglar averaged 15 disposals, four marks and 21 hitouts per game with the Hawks in 2021 and has yet to play a game for Geelong since joining the club. 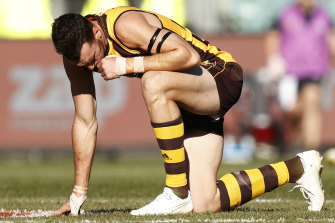 The Cats will face the Bulldogs next Saturday at the GMHBA Stadium, and the Bulldogs are dealing with their own injury concern. Midfielder Adam Treloar was subbed off in the win over Melbourne on Saturday night with a calf injury,

A club spokesperson said it was too early to confirm whether the 29-year-old would be able to return to the field next week after suffering “calf tightness”. Treloar will undergo scans on Monday to determine the extent of any damage.

Caleb Daniel is a chance to return for his first game since round 15, having recovered from a knee injury.