Any anxiety among Western Bulldogs players or fans that they'd have the indignity of falling to Adelaide first in 2020 were put to rest very quickly on Sunday.

Sure, Adelaide kicked the first goal of the game, but a quick flurry of five consecutive majors to the Dogs soon after was ominous. 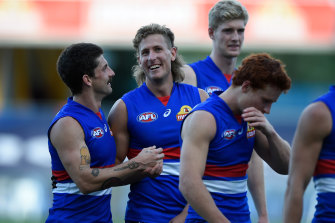 Aaron Naughton celebrates the win with his Bulldogs teammates.Credit:Getty Images

Also foreboding was the fact two of those goals were handed to the Bulldogs via mistakes from two usually reliable Crows, Jake Kelly and Reilly O'Brien.

Adelaide responded with three in a row of their own to end the term and another – when Brodie Smith kicked one on the run to start the second – to cut the Bulldogs' lead to eight points.

While the Crows were willing and pulled themselves back into the contest at that point, they couldn't do it again and the Dogs pulled away incrementally and then easily across the second and third quarters.

Adelaide couldn't stop Marcus Bontempelli, either. Matthew Nicks said the Crows were tagging him although he kept popping up on his own the entire game, and was allowed to attack contests unimpeded. 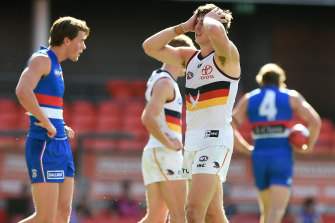 A dejected Jake Kelly during the Crows’ loss.Credit:Getty Images

He had six clearances in the first term and kicked a brilliant goal in that quarter too. He intercepted a handpass in the middle, gathered the loose ball, ran away from traffic, distributed into the forward 50 and then followed up his own kick to crumb the contest and salute from close range.

It's hard to judge just how good the Bulldogs performance was given how weak the Crows are, but they could not have done any more than what they did in the game. The Crows' work at stoppages remains quite poor and the Dogs feasted on that weakness.

Crucially, Aaron Naughton kicked a personal best bag of six goals, which will boost his confidence two games off a return from injury, while his team's run and handball game looked dangerous.

Naughton had the forward 50 to himself with Josh Bruce rested, and he will make the former Saint better once he returns.

The win means the Bulldogs stay in touch with the top eight and avoid losing four matches in a row. Their next game, against an improving Melbourne side, will give a good indication of where they are are at.

Sunday's game provided examples that showed the clearest sign yet of what Nicks wants his Crows side to be known for.

Like the system of play he helped craft at GWS, Nicks clearly wants one of the Crows' trademarks to be to attack by running in waves through the corridor.

Luke Beveridge would have been alarmed by the way the Crows carved up the Western Bulldogs numerous times early, carrying the ball from their defensive 50 into the forward 50 and then scoring. 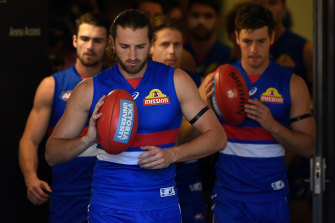 While a first win in 2020 and a first win since round 20 last year continues to evade the Crows, at least there are now signs of Nicks' tutelage appearing. A win seems no closer, however.

Worryingly, Rory Sloane only had eight touches and one clearance to three-quarter-time. He looked off the pace in his first game back from injury. Taylor Walker only had three touches to the same point.

Reports during the week suggested Lachie Hunter might be looking to leave the Western Bulldogs, despite being under contract. Beveridge dismissed those reports.

Hunter, in his return game from a stint on the sidelines for personal reasons, injected class into the Bulldogs' side with hard running and good ball use. He set the tone in that respect.

He kicked a fantastic third-quarter goal on the run and grabbed his jumper when celebrating. Clearly not a coincidence.