As a child growing up in West Pennant Hills, Daniel Saunders had only a passing interest in the game. Then his father took him to see Lance Franklin play in the flesh at the SCG: round 21, 2014, in the superstar’s first season in Sydney. In his 200th game, Franklin bagged nine in a demolition job of St Kilda.

Just in case Saunders wasn’t hooked, a few weeks later he was among the near 36,000 at ANZ Stadium who watched Franklin turn the qualifying final against Fremantle with two long-range bombs in the final quarter. 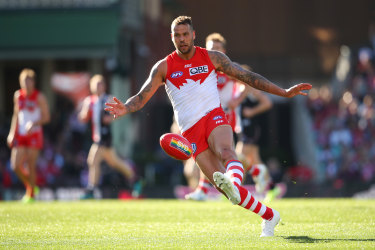 Adding another degree of difficulty, for the first time in more than a quarter of a century they have missed the finals in consecutive years and their glamour forward is struggling to get on the park.

More than ever, the Swans need Franklin playing – if not to lift their fortunes on the field but to spark the code’s recovery from 18 months without having big crowds at games.

There is no such thing as a one-man team, and yes the Swans had success long before he pulled on the red and the white, but there is a strong correlation between Franklin’s performance and the club’s fortunes on and off the field. 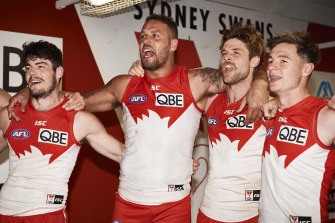 Lance Franklin sings the club song after Sydney’s win over St Kilda in his most recent game, back in round 23, 2019.Credit:Getty

His two most prolific goalkicking seasons came in grand final years; his next best in 2017 when they stormed home after a 0-6 start only to lose in the semis. When he missed the finals in 2015 due to a mental health condition, the Swans bowed out in straight sets.

In 2018, an injured Franklin was held goalless in an elimination final drubbing. The following year, Franklin managed just 10 games and the Swans plunged to 15th, and in 2020 they finished 16th when he did not play at all.

Swans chief Tom Harley disagrees with the “Buddy or bust” notion, pointing to the raft of young stars such as Isaac Heeney and Callum Mills coming through the ranks.

“Our club members are no different, they want to see the best players playing, and are invested in the performance of the team,” Harley says.

“We know he has a great affinity with our fans and all footy fans. How far he will move the dial, he’s an exciting player we think we’ve got young emerging players who play exciting football.

“From our point of view it’s not Buddy or bust by any stretch but we also acknowledge he’s a big presence, an exciting player and certainly one of the fan favourites.”

The Swans’ membership strategy this year is focused on their members being able to once again watch games at the SCG so therefore reliant on restrictions lifting. Retaining their members on seasonal packages, which generate higher revenue than limited access categories, is a priority even though it’s the latter which pushes them to the 60,000 figure.

Harley argues that the game in Sydney is mature enough not to be reliant on a marquee name for its prosperity, but there can be no dispute Franklin is good for business – both to the financial and win-loss bottom lines.

Chairman Andrew Pridham says for a club like the Swans, the difference between being in the black or the red is playing in finals.

“If he had played a full season in 2019 we would’ve made the finals in my opinion,” Pridham says. “The games that you lose by less than 10 points when he’s not playing, if he’s playing there’s a fair chance you win those games and you make the finals.”

Franklin was absent in four such games, the Swans missed the finals by four games, and posted a $520,000 loss.

“Finals are a big part of it. You make a lot in finals with prizemoney, you get bonuses from sponsors,” Pridham explains.

“Finals are important. That’s a big swing factor, it’s not the only one. If you’re doing well on the field your average crowds will be bigger, ticket sales will be higher, membership’s going to be stronger, corporate hospitality is stronger when you’re winning.

“The correlation between winning and revenue and profit is very high. Our largest financial risks have always been poor on-field performance so having a competitive team and an exciting competitive team with a few superstars does make a real difference.“

The questions then are can Franklin get back on the field and how much impact can he have? The Swans are confident both that he will play again, possibly as early as next week, and be a force once more.

“His last game was at the end of 2019, he didn’t play at all for a number of weeks and kicked four,” Swans coach John Longmire says.

“Watching him train this year he’s clearly got the talent, it’s just a matter of helping his body become resilient enough to do it regularly.”

For diehards like Daniel Saunders, they will go regardless Franklin is out there – but will those who became accustomed to watching from home come back?

“We’re confident the games will be on but you have to convince supporters that, you need to get them back into the habit of attending games,” Pridham says.

“You’re kidding yourself if you think you can be relatively unsuccessful on the field and have growing memberships. In Sydney that won’t happen. You have to be successful and I think we will.

“People can see us on the improve. We have a young team, an exciting team, we’ll play some attacking footy. That will bring the members in.”