The Broncos knew of Craig Bellamy’s talks with a Sydney club, later revealed to be the Cronulla Sharks, but remain confident they can secure the coach when his deal with Melbourne concludes at the end of this season.

Bellamy’s future beyond 2021 is a big talking point before the NRL season and, with a family health issue foremost in his mind, the 61-year-old has indicated he is in no rush to lock in a career path after his head-coaching tenure at the Storm. 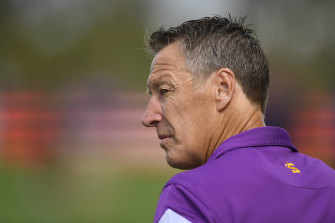 Craig Bellamy has some thinking to do as clubs line up to secure his services after this season.Credit:Getty

He is likely to tell Storm bosses of his plans beyond 2021 in the coming weeks but will be under no immediate pressure to make a call on his next move. He is not short of offers given his stature in the code and his record of success.

The Broncos have made no secret of their desire to hire Bellamy as a coaching director and have been in constant contact over the past three months. Club sources said Bellamy had been upfront with them about his discussions with a club in Sydney, although Brisbane only found out it was the Sharks recently.

That revelation hasn’t dampened the enthusiasm of officials at Red Hill, which will soon include incoming chief executive Dave Donaghy, the former Storm boss who will replace Paul White within weeks. 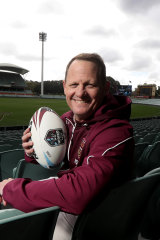 Kevin Walters has a big job to restore the Broncos to their former glory.Credit:Getty

Even with the ongoing drama around player behaviour and an unwanted first wooden spoon, the Broncos believe they still have the financial clout and stature to make Red Hill an attractive destination for Bellamy as a one-two punch with new head coach Kevin Walters.

The Storm are still in the equation, too, and want to keep Bellamy on in a consultancy capacity, which would allow him to return to Queensland to be closer to family while helping the Storm in a fly-in, fly-out role.

They would love him to simply continue as head coach but Bellamy spoke before the grand final of his fatigue in the role given its round-the-clock demands and the intensity he applies to it.

Bellamy has spoken of a desire to base himself on the Gold Coast but the Titans already have Mal Meninga in the kind of role Brisbane, Cronulla and the Storm envisage for Bellamy. At the very least, the Gold Coast have shown how effective a figurehead can be in the football department. Meninga was central to the club’s capture of Brisbane’s star edge forward David Fifita.

The option of another club in Brisbane has given Bellamy more food for thought. The Redcliffe Dolphins, who would likely trade as the Brisbane Dolphins, are favourites to be granted the next NRL licence.

The Dolphins have targeted Wayne Bennett as their inaugural coach, if he is available, but having an iconic figure like Bellamy on the books would be just as much of a boost – if not more – when building their first roster.

Dolphins chairman Bob Jones said he had yet to make contact with Bellamy but that discussion was on his radar as the bidding process progresses.

“We haven’t spoken to Craig yet but we probably will when the time is right,” Jones said.

Given Redcliffe’s strong financial base, which even the Broncos acknowledge makes them the frontrunner as a local rival, they would be in a good position to offer Bellamy a deal that would set up his semi-retirement.

And Bellamy may enjoy the idea of working with a blank canvas, rather than trying to revive the fortunes of clubs like the Sharks or Broncos.