Adam Elliott is so determined to remain at Canterbury he is prepared to sign off on a clause in his contract banning him from drinking alcohol.

Elliott will front the Bulldogs board on Monday in a bid to save his career at the club following a well-publicised toilet tryst with childhood friend and NRLW star Millie Boyle. 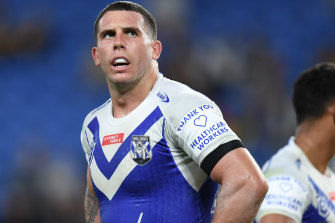 Adam Elliott is prepared to have a booze-ban clause inserted into his deal.

The Bulldogs forward was stood down for the remaining two matches of the season by the club and the NRL fined him $10,000 for “bringing the game into disrepute and failing to comply with biosecurity protocols”. Boyle was given a warning.

Elliott had not touched alcohol in seven months before letting hair down two weekends ago.

He is aware negative headlines have been generated whenever alcohol is involved, including a messy night out at the home of former teammate Michael Lichaa on Valentine’s Day, when police had to be called, and the infamous 2018 Mad Monday in The Rocks.

But sources close to Elliott told the Herald the 26-year-old is upset by the amount of attention his latest incident attracted, especially when no police were involved. 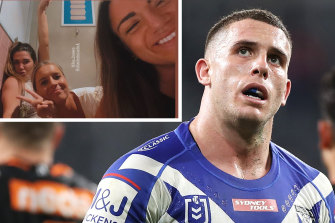 The Bulldogs forward was fined $10,000 for his night out with childhood friend Millie Boyle.Credit:Getty, Instagram

He did not leave out a single detail when recalling what had happened with Boyle at the White Rhino restaurant on the Gold Coast when the Bulldogs asked him to explain the incident the next day.

He has continued regular counselling sessions for alcohol and trained hard to prepare his teammates try and chase just their third win of the year on Sunday against the Wests Tigers.

There was no clause inserted into Elliott’s last contract stating he must abstain from alcohol. But he is prepared to sign one if it means he gets the chance to see out the final two years of his deal at Canterbury and play along side his mates and the club he loves.

Elliott passed on a more lucrative deal with the New Zealand Warriors last year because he liked the vision in-coming coach Trent Barrett had for the club.

Several teammates have rallied around Elliott since the latest scandal, including good friend and skipper Josh Jackson.

There were news reports on Thursday the Bulldogs were prepared to let Elliott find another club rather than shred his contract, which is worth around $1m over the next two years.

Canterbury have some big-name recruits headed to Belmore next year, including Josh Addo-Carr and Tevita Pangai Jr, and there are already suggestions the club will need to create some room with their cap.

Elliott’s manager David Riolo said as much when he told the Herald last week: “I just hope this hasn’t been beaten up and some sort of attempt to have a player dismissed so it helps create some cap space for the club.

“I don’t think it’s a great look and the situation was unfortunate for all. But I still think it has been an over-reaction to an incident when you consider everything that’s going on in the world right now, it’s quite minor and [an incident] that wouldn’t have had a huge impact on the club.”