Matthew Lloyd says a lack of strong standards and "ruthless edge" has contributed to Essendon's poor record in finals over the past 15 years.

The Bombers have not won a final since 2004, a drastic change from Lloyd's early years at the club. 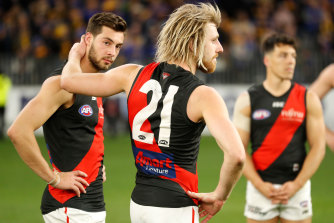 A dejected Dyson Heppell after Essendon’s most recent finals loss, to West Coast, in 2019.Credit:Getty Images

He told the Real Footy podcast that when he first got to Essendon, he and his fellow draftees were told anything less than a preliminary final appearance was a failure.

"I understood – big finals … that's what you do at Essendon," Lloyd said.

"I just feel like through that period when [Justin] Blumfield left, [Blake] Caracella left … [the club had] salary-cap issues, then Damien Hardwick had to leave for salary-cap issues. And just our standards really dropped.

"We probably weren't working as hard, other teams [got] better. We lost our aura … I never would have thought that it would have gone on for this long."

He said fallout from the supplements saga and salary-cap issues had contributed.

"There just hasn't been strong enough standards from the top end, you know, since senior people retired," he said.

"The ruthless edge that Kevin Sheedy had, when we first walked in. And Robert Shaw and Mark Harvey and those guys, there just hasn't been those standards."

Lloyd said Essendon's players needed a taste of what it was like to win in September, and agreed the issue had been less about talent and more about culture.

"The longer it's gone on the more guys might be content with playing well individually, but not so much understanding what you play football for. And I'm sure they're feeling that way, that they're striving hard and all that. But when you compare them against other teams, maybe they haven't been." 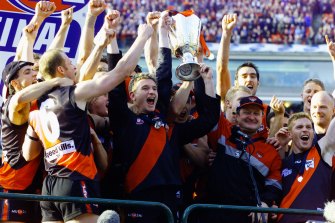 Lloyd thought coach John Worsfold's game style didn't suit playing good, hard football, either. "I think there's been changes made over this off-season, which has got the players feeling a lot more comfortable about the game style," he said. "But I think it's a number of reasons, which [have] had Essendon pretty mediocre over a period of time."

Asked whether Essendon had the nucleus of a premiership team, Lloyd said the back line was good enough and there were no more excuses for the midfield. But he questioned whether the forward line would be good enough without Joe Daniher.

"If Daniher's not fit, I just don't see them kicking enough goals without him. So that's the big question mark on them pushing hard for a top four or five spot, is I think on the fitness of Daniher."

He praised Worsfold for being a "team player" in regards to the coaching handover with Ben Rutten and said Caracella's appointment as an assistant was "nearly the biggest recruit Essendon have had in a long, long period of time".

"[Essendon have] had their down period, they've been … to hell and back. But I think they can hit back pretty hard over the coming years, because I think their list is still in a wonderful position to strike and do some damage."