Experienced assistant coach John Barker has resigned from Carlton but is set to leave the club sooner than he anticipated.

Barker, who is currently serving as the Blues’ stoppages coach in his 11th season at the club, offered his resignation to football boss Brad Lloyd on Monday, citing personal reasons.

A club source has told The Age Barker wanted to remain with the team until the end of the season, but the club’s preference was for him to leave immediately. 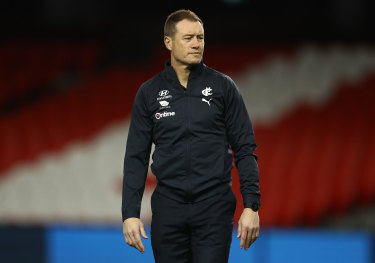 It’s now expected Barker will depart during Carlton’s bye round this weekend and won’t be in the coach’s box for the Blues’ round 14 clash with Greater Western Sydney.

Barker’s resignation came on a day of significant news at Carlton, with the club set to launch a wide-ranging external review into the football department.

The review, which will be lead by incoming president and former PwC boss Luke Sayers, comes amid a string of poor performances under embattled coach David Teague.

Carlton confirmed the review in a statement on Tuesday morning.

“This process will be conducted by an independent review panel external to the Club, reporting to Luke Sayers and the board,” outgoing President Mark LoGiudice said.

“The club acknowledges that we are not satisfied with where we are at from a performance perspective.

“We feel we owe it to our members and supporters to leave no stone unturned in our attempt to improve our on-field performance.

“Rather than wait until the conclusion of the 2021 season to undertake this review, we feel the opportunity is available to formalise this now, as we head into the half-way mark of the season.”

Barker has been a much-loved figure at Carlton since arriving in 2011.

Following his playing career, Barker worked under Ross Lyon at St Kilda and was forwards coach under Alastair Clarkson at Hawthorn in 2009 and 2010.

Barker would go on to coach Carlton midway through 2015 when the club acrimoniously fell out with Mick Malthouse.

In 14 games as senior coach, Barker won three and he went on to be interviewed for the permanent role but eventually lost out to Brendon Bolton.

Barker told the club he wanted to spend more time with his family and would be taking time away from football.