The karma bus ran straight over the top of Wayne Bennett on Thursday. It wouldn't have surprised if Anthony Seibold was behind the wheel, driving the express service straight to NR-Hell.

All week, in the lead-up to Souths’ clash with the Broncos on Friday night, Bennett was masterminding predictable stories about Seibold replacing him at Brisbane in late 2018. 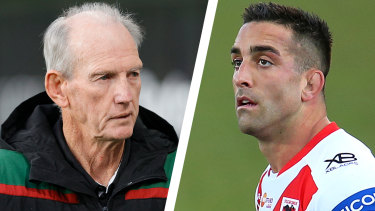 "This will test the NRL!" said one official. Then this from a rival coach: "I can't even go for a walk – he's at a restaurant?"

The real test was for ARL Commission chairman Peter V’landys, who has become enamoured with Bennett since appointing him to the Project Apollo team.

People question how close Phil Gould is to V’landys, and even more so since the chairman told the Herald last week he wants Gould to do a "complete review" of the "trouble area" of the referees.

But many within the game are also keenly aware just how much V’landys listens to the 70-year-old mastercoach.

Indeed, it was no coincidence that the six-to-go rule that V’landys rushed in, without much consultation, for the resumption of the NRL on May 28 suited Souths and their lightning quick dummy half, Damien Cook.

Bennett confirmed the breach on a Zoom call with reporters on Thursday morning but pleaded ignorance about Project Apollo's protocols.

A reminder once again: Bennett is on Project Apollo.

"The rules have changed so many times and I didn’t think I was breaking rules," Bennett said. "I wasn’t with a group. We were self-isolating."

Self-isolating in a popular Norton Street noshery? OK then.

As the day dragged on, we all watched our inboxes with interest, desperate to see how King Pete handled his new friend’s flagrant disregard for the rules.

At 3.10pm, the official word from headquarters arrived …

No fine. No sanction. Bennett has been forced to self-isolate for two weeks. So, too, Dragons prop Paul Vaughan for attending an Illawarra cafe on Thursday morning, ruling him out of that night's match against the Roosters.

Penrith halfback Nathan Cleary – who is 22, by the way – copped a two-match ban, six Dally M points and a $30,000 fine for lying about his TikTok dancing video.

In the AFL last week, Collingwood coach Nathan Buckley received a $50,000 fine (with 50 per cent suspended) for playing tennis with former world No.8 Alicia Molik outside the AFL bubble in Perth.

Surely, though, someone of Bennett’s standing – and as someone on Project Apollo – needed to be held to a higher account. Surely, a fine of some description was required here.

NRL chief executive Andrew Abdo told 2GB he was still mulling over whether Bennett and Vaughan will receive further punishment.

If the two weeks are the only sanctions, though, perhaps cast your mind back to mid-June when Bulldogs prop Aiden Tolman also missed two weeks because one of his children attends a school where a staff member tested positive to COVID-19.

Tolman was a victim of circumstance. He did nothing wrong. Bennett broke a basic rule set up by the committee of which he is a very prominent and outspoken member.

As many are starting to suspect of the people running this game, there's one set of rules for some people, another set altogether for others.

Bennett’s attempts to trash Seibold and the Broncos bring back memories of the great line from former Prime Minister Paul Keating to Opposition Leader John Hewson, who called on Keating in 1992 to call an election.

"Because, mate, I want to do you slowly," Keating told Hewson.

Bennett is doing Seibold and the Broncos slowly, like pigs on a pit.

Using his official mouthpiece, The Courier-Mail, he slammed suggestions he was undermining Seibold’s final weeks at Souths in 2018.

It was more smoke and mirrors from Bennett, and another unedifying kick in the guts of a club on its knees. 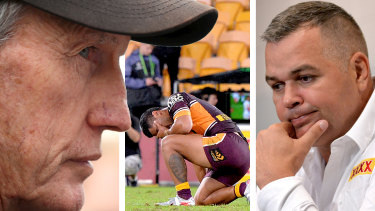 Wayne Bennett seems intent on going after the Broncos and the man who replaced him at the club, Anthony SeiboldCredit:Getty

White is leaving anyway with the mail getting stronger by the day that NRL 360 host Ben Ikin will take over as chief executive.

The more interesting subplot, of course, is who will replace Seibold if the board finally decides to get rid of him. The $3 million-ish payout would mean the club would record its first significant loss in many years.

Some board members are already thinking out loud that former Cowboys coach Paul Green is the answer. He’d need a good head of football, though.

Cowboys football boss Peter Parr’s name keeps getting linked to the role. The Broncos would be lucky to have him.

Some Broncos directors are less excited about Green but keener on bringing in Kevin Walters as coach … after they snubbed him for Seibold in the first place.

You can't make this stuff up.

If you needed any further proof that the hybrid game between the Kangaroos and All Blacks match that boxing promoter Dean Lonergan is selling is dead in the water, consider this: the ARLC won’t even let him present his case unless he can guarantee the $8 million windfall he’s promising for the Kangaroos.

In other words, he needs to come up with the cash before it will even listen to what he has to say. Good luck with that. 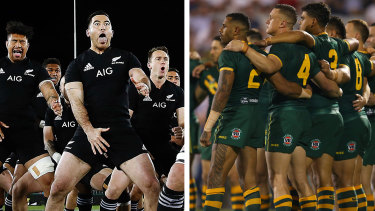 The All Blacks and the Kangaroos hybrid game still has some massive questions hanging over it. Credit:

The reason the ARLC hasn't completely knocked it on the head is the so-called "optics" of it all. In these extraordinary times, it has to look at every possible proposal to bring money into the code.

It’s the same as the continued push from Storm powerbrokers, headed by majority stakeholder Bart Campbell, to sell off 20 per cent of the NRL to private investors.

Some cash-strapped clubs with dollars signs in their eyes are keen on the idea. Others, like Roosters powerbroker Nick Politis, think it’s dangerous to sell out to overseas investors who only want to profit from the game.

Who to believe? I’ll listen to the car salesman worth $1.3 billion.

The Bulldogs are in serious danger of losing workhorse back-rower Adam Elliott, who has received a massive offer from the Warriors.

Elliott wants to stay at Belmore under incoming coach Trent Barrett, but the offer from the Warriors is significantly higher than what’s on the table from the Bulldogs, who have been low-balling him since negotiations first started.

The 25-year-old has developed into a real leader of men, especially off the field.

He’s also got a massive heart, overshadowed slightly at the moment by his bright blue hair, which he’s done this month as he raises funds for the Autism Community Network. 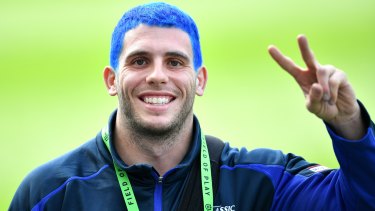 Adam Elliott has dyed his hair blue for a good cause … Not a bad look.Credit:NRL Photos

Elliott’s brother, James, has autism. Those who live with the disorder are struggling because their routines have been completely thrown out in these COVID-restricted times.

You can donate through his GoFundMe page or the link in Elliott’s Instagram bio.

The quote
"Dear Tennis, let us take a breath here and remember what is important, which is health and safety as a community." – Now that Nick Kyrgios is the unofficial King of the Moral High Ground, he’s not keen on giving it up.

Thumbs up
The Roosters’ Mitchell Aubusson, who played his 300th match against the Dragons on Thursday night, and the Tigers’ Chris Lawrence, who notches 250 when his side plays the Knights, are two of the NRL’s great clubmen. A raised glass of activated charcoal water to them.

It’s a big weekend for …
The Bunker, which is under all sorts of pressure at the moment. From incorrect calls, to people wanting it blown up, to people wanting to widen its powers to make calls on forward passes, will someone think of The Bunker? And the children.

It’s an even bigger weekend for …
NSW and Queensland as they do battle at the SCG on Saturday night. The Reds won the first match of the revamped Super Rugby comp and there’s been a ripple of sledging in the media between the two sides.