Jacob Koschitzke took fewer games to kick a bag of five goals for the Hawks than Peter Hudson and Jason Dunstall.

Hudson and Dunstall each had to wait until their sixth games before they kicked such a bag (Dunstall kicked eight as the Hawks piled on 27 goals against Richmond in 1985). 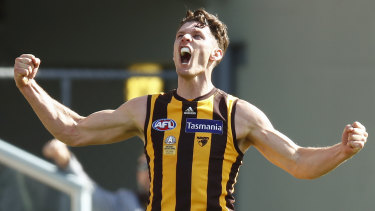 Jacob Koschitzke celebrates one of his five goals for the Hawks in their win over the Crows in Tasmania.Credit:Getty Images

Koschitzke was playing just his fifth game when he kicked five goals against Adelaide on Sunday. 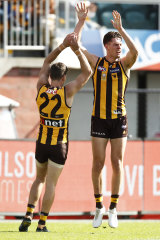 Jacob Koschitzke of the Hawks celebrates a goal with Luke Breust during their round six match against the Crows at University of Tasmania Stadium.Credit:Getty Images

Even Leigh Matthews was in his 20th match but was the youngest Hawk of the bunch mentioned to kick five goals. Darren Jarman kicked five in his fifth game.

Of course Dermott Brereton kicked five on debut, in a semi-final no less, in 1982.

No-one at Hawthorn would like such comparison as they want everyone to be patient with the progress of potential forwards such as Koschitzke, Mitch Lewis, and the yet to be seen at senior level prospect Emerson Jeka.

The 20-year-old, who is trying to make his way as a serviceable, consistent forward, would not want to be connected to the greats either at this early stage of his career.

“I just want to build a block of work of consistent games of two or three goals, rather than a five here and a one here and there,” Koschitzke said.

But the statistic is stark, even if Matthews, Franklin, Brereton, Dunstall and Roughead were all younger than Koschitzke when they first kicked five goals in an AFL match.

It highlights the possibilities inexperienced players have now of kicking bags and influencing results under the new rules that allow the football to move more freely and give forwards space.

In 2021, 14 players have kicked at least five goals in a game with Taylor Walker, Toby Greene and Harry McKay doing so more than once.

The King brothers, Harry McKay, and Oscar Allen have each kicked their first bag of five goals this season.

In 2019, 29 players kicked five goals with only Connor Rozee and Eric Hipwood under 21 when they did so.

The other aspect to Koschitzke’s effort is that he was recruited as a defender in the 2018 national draft, having been named at full-back in the All-Australian under-18 team that season.

The move came about because Koschitzke was such a dedicated defender that he had become over-compliant, following the team ethos to such a degree his ability to attack had almost disappeared.

His effort made him a popular teammate, a certified fanatic on the training track, but not necessarily what Hawthorn wanted from him as they battled to find a one grab tall to support either Mitch Lewis or Tim O’Brien inside 50.

So Alastair Clarkson sent him forward alongside Lewis and pushed O’Brien back, where he should belong for the foreseeable future, and watched him take his chance, just like Brownlow medallist and premiership player Shane Crawford did so when he snagged five goals in just his second game way back in 1993.