We said this about season 2020, but it was another miracle that the 2021 campaign was completed. Here’s what made headlines in a season that will live long in the memory.

WORD OF THE YEAR: ‘DISRUPTION’

This was another season when the AFL’s best-laid plans had to be adjusted on the run because of the fallout of the pandemic. The Lions were briefly based in Melbourne early in the season, while the Swans and Giants had to relocate south in July when Sydney went into lockdown. Then Melbourne’s sixth lockdown became the dominant theme, given this meant matches in Victoria were either played behind closed doors, or were taken interstate. 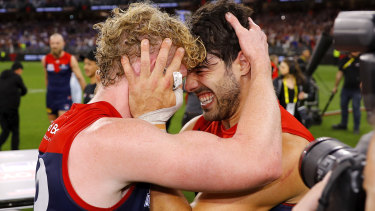 However, this allowed for a floating fixture, which had its benefits, particularly for broadcasters. Hopes of finals being held in Melbourne were soon dashed, before the biggest call of all was made – the grand final having to leave the MCG for the second-straight year. Brisbane held the showpiece event in 2020, and this time it was Perth’s Optus Stadium – despite that state’s hardline stance on border control – which had the honour of hosting Melbourne and the Western Bulldogs on the grandest day of all.

Melbourne: The Demons finally snapped a 57-year premiership drought in emphatic fashion. Led by skipper Max Gawn, they were dominant through the finals, and their comeback from 19 points down in the third term against the Bulldogs was breathtaking. They went on to win by 74 points.

The city of Perth: Melbourne’s loss was Perth’s gain when the AFL grand final was taken west. Optus Stadium, with its modern technology, including state-of-the-art lighting, ensured a colourful off-field show, while the locals embraced the two interstate teams. 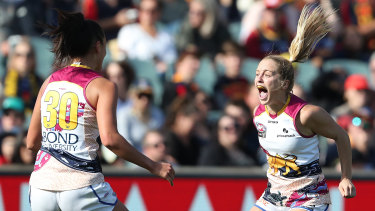 Brisbane: It was a case of third time lucky for the Lions when they captured the AFLW premiership, defeating the Crows at Adelaide Oval by 18 points. The Lions lost captain Emma Zielke to a hamstring strain in the third term but, with defender Kate Lutkins best on ground, they held sway.

The coaching caper: Nathan Buckley (Collingwood), Alastair Clarkson (Hawthorn) and David Teague (Carlton) were the three men who lost the top job at their respective clubs. Buckley will always be a Magpies’ legend, but he couldn’t deliver the ultimate prize. Teague’s days were numbered when the Blues announced a major external review into their football department. Another year of inconsistency hurt, and he was one casualty of a cleanout at Princes Park. For Clarkson, the four-time premiership coach and the best of his generation, it was a messy ending involving an aborted succession plan with Sam Mitchell. 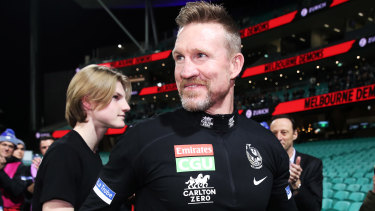 Victorian and Sydney football fans: For the second year in a row, attendances in Melbourne were either restricted in numbers, or ruled out altogether due to the pandemic. In a year when the Swans and Giants both made the finals, NSW-based fans were also largely forced to watch on from the couch.

Geelong: The Cats have been a standout in terms of rebuilding on the run, but they’ve been unable to jag a second flag under Chris Scott. They were dismantled in the preliminary final by Melbourne, the fourth time they have fallen just short of the grand final in the past six years. They were also beaten by Richmond in the 2020 grand final at the Gabba. The latest defeat sparked change in their assistant coaching ranks. 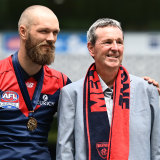 Max Gawn and Neale Daniher stand on stage together during the Demons’ long-awaited AFL premiership celebration at the MCG in December.Credit:Getty Images

There were the usual complaints about rule changes, including the standing-the-mark rule, which encouraged a more attacking manner of play through the corridor, while the interpretation of holding the ball was another bugbear for coaches and players alike.

However, it is hard to go past the post-season mandate that players had to be fully vaccinated. This has had implications in both the AFLW and AFL, most notably when Carlton defender Liam Jones chose to retire rather than be vaccinated.

Jordan De Goey is never far from the headlines, and so it was that he found himself arrested and charged by New York police after a nightclub incident in the city that never sleeps.

MAN OF THE YEAR

Surely it’s Max Gawn, who took on a life of his own in leading the Demons to their breakthrough victory. Gawn, complete with his Ned Kelly-style beard, was the dominant ruckman in the competition, was named All-Australian captain, ensured his teammates remained focused in a season of upheaval and became a cult figure, reinforced with his post-siren heroics against Geelong in round 23.

WOMAN OF THE YEAR

We have decided to split this into three. Collingwood’s Brianna Davey and Fremantle’s Kiara Bowers were the joint AFLW best and fairest players. Each is admired by teammates and opponents across the league.

VIRAL MOMENTS OF THE YEAR

Heavy hit: David Mackay’s ferocious bump on Hunter Clark in Cairns, which left the Saint with a broken jaw (and ongoing issues), divided the football world. Was it a fair bump, or did the Crow fail to show a duty of care? While Mackay wasn’t reported on the night, the incident was sent to the tribunal, where he was cleared. Amid a greater focus on avoiding head injuries, a bump of that kind next season is likely to result in suspension.

Not easy being Greene: Toby Greene is never far from the headlines and that was the case again in a handful of incidents this year, most notably when he made contact with umpire Matt Stevic in the elimination final against Sydney. Suspended for three weeks at the time, the penalty was doubled to six when the AFL appeals board upheld the league’s appeal.

Making their mark: There was no shortage of contenders for mark of the year. Richmond’s Jack Riewoldt, Sydney’s Isaac Heeney, Hawthorn’s Mitch Lewis, and the Western Bulldogs’ Cody Weightman had strong claims, but there was something special about Shai Bolton’s stunning grab over Mark Blicavs that meant he got the nod.

QUOTE OF THE YEAR

Alastair Clarkson, on Friday, July 9, insisted he would remain as Hawthorn coach next season and the succession plan with Sam Mitchell would work. 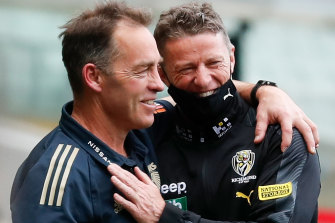 “I’m contracted until the end of next year and I am staying here. There’s plenty of sceptics out there that say: ‘Well, that’s not going to work, they’re two hard-nosed and stubborn lads.’ But tell me a coach that’s not. We will work our way through that. He and I know each other pretty well.”

By the end of the month, The Age revealed this season would be Clarkson’s last at the Hawthorn helm.

The football world is hoping the disruption, certainly to the extent of 2021, eases, but Western Australia’s border stance means there are already issues with the AFLW fixture. The Demons are well-placed to win back-to-back flags, while the Tigers believe they have one more deep run in their squad. Carlton coach Michael Voss, in his second stint as a senior coach, has a point to prove, while it remains to be seen how much time the Collingwood and Hawthorn fan bases give their new coaches, Craig McRae and Mitchell respectively, to rebuild. Expect more focus on head injuries, while the future of AFL chief executive Gillon McLachlan will also be a talking point. Could the 2022 season be his last in charge? A big call also awaits for club presidents when they vote on if, or when, a Tasmanian-based club should be admitted as the league’s 19th club.