The AFL are investigating two Richmond players for an apparent serious breach of the AFL's special COVID-19 rules that appears certain to have the Tiger pair sent home.

In a highly embarrassing and poorly-timed incident for the AFL, Richmond's Sydney Stack and Callum Coleman-Jones were reported to have been outside a Gold Coast night club on Thursday night – a clear and significant breach of the rules that the AFL has established in Queensland hubs to enable the competition to continue. 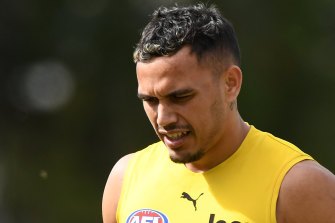 Club sources have confirmed that the players were out of their hub and while the AFL is investigating the detail and has not yet commented, the league's stance – and the sensitive political situation surrounding the relocation of the competition to Queensland – means the AFL and Richmond seem certain to take a strong stance.

The players would appear to have breached the rules, in that they do not have a permitted reason for leaving their hub.

Should they be sent home to Melbourne, as seems highly likely, this would leave the Tigers without two players, albeit Stack did not play against Fremantle on Wednesday night. It is a situation that is more fraught for the AFL than even the Tigers.