It was almost 100 years ago that CTE (chronic traumatic encephalopathy) was first diagnosed in boxers. Also initially termed “punch drunk syndrome”, the degenerative brain disease is mostly found in people with a long history of head trauma.

But it has only been in the past 20 years, triggered by cases found in former players of America’s NFL – it can only be diagnosed after death – that concern has grown in other sports, including the AFL. In 2008, the league set down new rules on the way players should be assessed after head knocks, and since then has continued to change the laws of the game to curtail reckless high bumps and dangerous tackles. 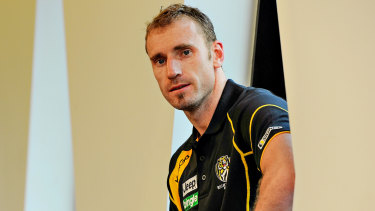 Former Tiger Shane Tuck was found after his death last year to have a severe case of CTE.Credit:Sebastian Costanzo

But things have become more urgent as three former AFL players – Polly Farmer, Danny Frawley and most recently Shane Tuck – were diagnosed with CTE in the past 12 months, a result of the establishment of the Australian sports brain bank.

Last week, the AFL moved to further tighten the rules around care of players after a concussion, with the league announcing that any player who suffers the condition must sit out for a minimum of 12 days. The league claims they are the most stringent of any sport in Australia. And just as importantly, the league plans to put pressure on lower leagues to follow suit.

It’s a major revamp, with players forced on most occasions to miss at least one game, but it’s not before time. While some have raised concerns that players may try to avoid being diagnosed with concussion, the rule change is a clear signal that the long-term health of the players must come before any consideration of how it may impact the result of a future game.

The AFL must also have its eye on the possible financial ramifications of not acting soon enough. WorkSafe Victoria has appointed two concussion experts and completed three detailed reports in an investigation into whether the AFL has failed in its handling of player head knocks. And a group of former AFL players, including John Barnes, Greg Williams and John Platten, are considering a class action against the AFL over concussion-related concerns.

Sport doctors are also coming forward to raise the alarm.

Dr Peter Brukner, a professor of sports medicine at La Trobe University, has described the issue of concussion as the No.1 problem for sports throughout the world. And the American head trauma expert who helped establish the Australian sports brain bank, Dr Chris Nowinski, recently said that while only three former AFL players had been diagnosed, based on the experience of America’s NFL, “this is just the tip of the iceberg”. He also expressed concern that bigger, stronger footballers, starting younger, training harder, playing more games and finishing later because of the money on offer had deepened the problem in all codes.

The AFL is acting, but the question remains as to whether it is acting fast enough. Unfortunately only time, and it could be many years, will reveal the full story. Until a test can be developed that gives the league a present-day snapshot of the scale of the problem, decisions will be based on an incomplete picture.

Shane Tuck, who died aged just 38, lived with his parents for the last 18 months of his life, and they watched his deterioration in anguish. “He was intelligent enough to know that there was something wrong with his brain,” his mother, Fay, said. The tragic legacy of a life cut so short is surely hard to ignore.

Note from the Editor

The Age’s editor, Gay Alcorn, writes an exclusive newsletter for subscribers on the week’s most important stories and issues. Sign up here to receive it every Friday.