AFL club membership has fallen for just the second time in 30 years but five clubs have still managed to break their all-time records despite the hit of COVID-19.

The AFL unveiled its final club membership numbers on Wednesday, with 992,854 members across the league's 18 clubs. That was a 6.1 per cent drop on last year's record.

West Coast – who still managed to play most of their home games in front of crowds at Optus Stadium – topped the tally with 100,776 narrowly ahead of reigning premiers Richmond who had 100,420.

Club membership has grown year on year for the past three decades with the exception of this year, and the Olympics-affected 2000 season.

“Footy is about connection and a sense of belonging and this remarkable number demonstrates AFL members are the most passionate and loyal members across all sports,” AFL chief executive Gillon McLachlan said in a statement. 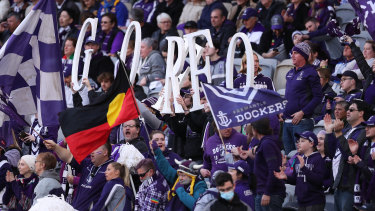 “The commitment members made to their clubs is a key reason why all 18 clubs were able to survive a challenging and unprecedented year.

“We have been blown away by the loyalty and commitment footy fans around the country have demonstrated this season.”

“On behalf of the AFL, I want to say thank you to every single person who signed up this year.”