Melbourne coach Simon Goodwin has revealed the “visible stress” Kozzy Pickett experienced after the Demons star was subject to a racist slur this week, with AFL chief Gillon McLachlan imploring the public at large to think about the effects their words could have before posting on social media.

After Adelaide’s Taylor Walker was hit with a six-match suspension and $20,000 fine for a racial slur made in reference to North Adelaide player Robbie Young – and with a raft of Indigenous players subject to racist remarks on social media in recent seasons – McLachlan said the league was looking broadly at its frameworks to deal with the scourge of racism, both in terms of prevention and response, including the possibility of an accreditation system for club and league personnel on issues of race education. 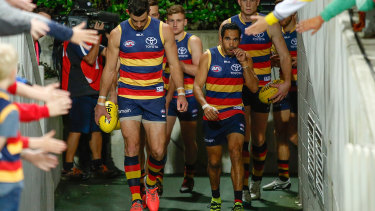 “[We are having] ongoing discussions about accountabilities. The conversation is around – there can be sanctions and fines – but how do we get people to understand that hurt that is being caused across the whole game?” McLachlan said.

“And how do we have a path for them that beyond the accountabilities, says they’re not coming back until there is genuine contrition, remorse, learning and understanding of that hurt?

“Maybe those accountabilities need to look different and we can flip that on its head and we can talk about actually an acceptance and a different approach. Because the debate about ‘too light, not right, not enough’ is different from the debate I’m having with others about the understanding of the hurt and the pathway back for players and individuals to be able to continue on in our industry.”

Second-year Melbourne player Pickett was subjected to a racist slur on social media this week, and while McLachlan said the league had been dealing with social media companies about making trolls accountable, he ultimately implored people to treat others as they would wish to be treated.

“If someone who goes and does this, if you understand how you would feel if you were your parents or your brother or your sister or your children was being wounded by something, and if you put that lens on when you go to type something racist or that vilifies someone, and if you have that lens, maybe you’ll pause.

“Punitive action only [goes] so far.”

But McLachlan would not specifically address the case of Joel Wilkinson, the former Gold Coast player who remains aggrieved at the manner in which he was treated by the AFL after several incidents of racial discrimination during his career.

Adelaide captain Rory Sloane said on Thursday that he had held discussions with the Crows’ Indigenous players following the Walker incident.

“They’ve been very honest with me, which is all I can ask for,” Sloane said.

“It’s very tough one for someone like myself to put myself in their position. 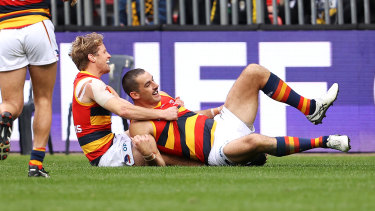 “To try and understand this at a deeper level is something we all should do, to have the chat.

“As a whole footy club, we don’t stand for racism.”

Goodwin said 20-year-old Pickett had initially struggled after being the victim of abuse.

“Seeing Kozzy post-game, being able to give him a hug and see the visible stress he was under makes it incredibly upsetting. We need to make a stand,” Goodwin said on Thursday.

“Kozzy has had a tough couple of days, he’s struggled. He’s in a good mindset around things now, and he’s got a lot of support around him from us as a footy club.

“But we will continue to fight for the Indigenous population because this needs to stop. Kozzy is super human that we love at our footy club.”

Meanwhile AFL and Crows major sponsor Toyota has applauded the league and club’s stance in relation to the Walker matter.

“Toyota Australia commends those who called out this behaviour and took a stand against racism,” a Toyota spokesperson said.

“By holding the player to account, the AFL has reinforced that there is no place for racism or discrimination in football or in the community.

“We stand with the AFL and the Adelaide Crows in condemning any racist conduct.”

Keep up to date with the best AFL coverage in the country. Sign up for the Real Footy newsletter