I've been thinking, just a little bit, because it doesn't really worry me too much anyway, 'Who will win on Saturday?' I'm thinking Richmond, probably because they are better, quicker, more even, more team-oriented. I also think they'll win because the game takes me back to 1967, when these teams last met in a grand final. Until 1989, the '67 grand final was the best game of football I'd seen.

To get finals tickets in those days you queued mid-week before the first semi. They were series tickets. You had to buy the four, and from memory for a junior they were $5.95 for the series. And when I say queued, it was camping out overnight in Jolimont Park in front of the MCG, with thousands of others in a disorderly line. Freezing cold, sleeping on asphalt, with your cousin and others who just wanted to drink and fight. 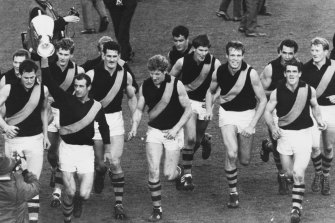 Anyway, in '67 we got the tickets. These weren't standing room. Top of the northern stand, seats, a glory. My Pies had been beaten in the first semi, embarrassed by Geelong. Con Britt ran Sam Newman into the fence early, puncturing a kidney I think, and was booed for the rest of the day. Des 'Tuddy' Tuddenham spent the rest of the game chasing Cats and their heads. If you couldn't win, you maimed the opposition. That's how it was.

The other finals meant it was a Richmond-Geelong big one. The Tigers under Tom Hafey hadn't been in finals for ages, but were primed. Tommy had brought a new way of doing things – 188-centimetre wing-men for a start. Superfit, kick long to Royce Hart, brutal when you need to be.

Where did I get my money to go? Mum and Dad didn't have any. It was a sad, strange year for me, a 13-year-old. The family had moved to Elwood from Preston, but I was distraught about leaving Marist Brothers. I couldn't, and travelled every day to school from Elwood to Preston. Except for a couple of days a week when I stayed with Nan and Pop in West Heidelberg in their tiny two bed flat. They were beautiful grandparents, so kind, soft, caring, loving. They drank most nights. Nan got up most mornings around 4.30 to do her cleaning job. Pop worked somewhere, but there was always breakfast, a made lunch, and stuff like curried sausages and roast something every night. And pocket money.

Stag deer on the wall kept me awake many nights, staring at the eyes, and waking to hear Nan get up. A quiet shuffle, kettles boiling, porridge cooking, the hot water boiler over the bath kicking in when the tap went on. The red and white bus along Bell Street from the Mall to Plenty Road, past the Gowerville, to Marist Brothers. And always pocket money from Pop, always. A champion. Talked with you, looked you in the eye, listened, had a chuckle, and tickled Nan's fancy. She often called him a dirty bastard. They loved a beer before dinner, during, and thought TV was a great invention. Laughed and cried at it, sat in the same spots, and I was allowed to watch stuff I wasn't allowed to at home.

I was in the choir at Marist Brothers. A fair to middling pretend soprano. We sang lots, were Victorian Choral Champions, did a lot of weddings and stuff, and sang with Olivia and Turps on 'Night-time for Terry'. We actually earnt quite a bit of money, and at the end of the year Brother Choirmaster took us to the 'Sound of Music' and gave us $10 each. Big money.

What could I do with $10? I bought an Instamatic 25, $5.95 at the chemist in Elwood. Complimentary 25 slide full colour cartridges.

So I took that Instamatic to the '67 grand final. I felt so proud of it, around my neck; I felt a bit privileged. Top deck of the northern stand. A mile away from the oval.

Before the game, I wandered down three or four flights of stairs, down a ramp of steps, to the fence, and climbed over. No one stopped me. The camera still around my neck. Again, no one asked me what I was doing. Geelong's turn to come out, led by Polly Farmer, click, click from a couple of feet away. I have memories of Happy Hammond clickity clicking with a piano accordion in the race, umpire Peter Sheales running through a couple of strips of white crepe, maybe a pair of goalies, pair of boundaries in tow. The Tiges ran out with a bloke out of Homicide leading them, Fred Swift. 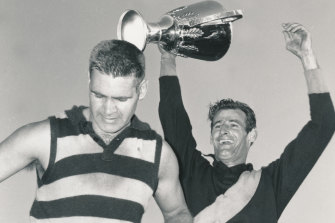 What transpired was a great game. Polly to Bill Goggin or Anthony Polinelli to Doug Wade. Kevin Bartlett long to Hart, Paddy Guinane pulverising Chris Mitchell into the bargain. In the end I remember John Ronaldson kicking two 60 yarders from the flank for the win. And the crook Fred Swift marking two yards over the line to prevent a Cats goal.

After the game, I ventured back on to the ground. There were huge men, major celebrations. I have photos of Freddy with the cup on the dais, Polly disconsolate, Goggin crying, Geoff Rosenow scary, John Northey a bag of bones, Hart imperial, and Guinane as scary as Rosenow. Slides, all on slides; they're out there somewhere.

I hope 2020 in Brisbane they revisit 1967 in Melbourne. I won't be there, won't be on the ground with my phone, snapping Trent Cotchin, Dustin Martin, Patrick Dangerfield and Gary Ablett. I'll be in my lounge room, staring at the screen, hoping for a great game, and to snare the Norm Smith -Shane Edwards, I reckon – 53 years after my second-ever favourite final.