Cronulla workhorse Cameron McInnes hit the tackling bags so hard that blood started trickling down the side of his face.

McInnes plays the game hard but trains even harder. He is the player who famously wrestled Ronaldo Mulitalo before Christmas and somehow dislodged a screw from his jaw.

Mulitalo kept the screw as a keepsake in his locker.

McInnes’ intensity at training and on game day is what has made him an instant favourite in the Shire – and the same reason so many St George Illawarra fans who watch the derby on Saturday night will still be wondering why the Dragons let him go.

Cronulla coach Craig Fitzgibbon could not believe the scenes recently when McInnes split himself open on a tackling bag made of old-fashioned leather.

“He came out of that drill with blood all over his ears,” Fitzgibbon said. 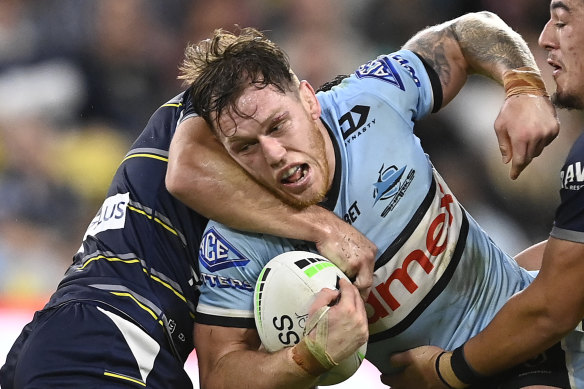 Cameron McInnes has quickly become a favourite with Cronulla fans and his coach.Credit:Getty Images

“I know Dale [Finucane] is revered in the way he prepares and his intensity, but Cam is the same. He is absolutely relentless. You know what you’re getting every day, every meeting, every session and every game.”

McInnes laughed when the Herald reminded him about frightening his teammates with the bloody scenes.

“I have a graze on my right ear and I keep ripping it off – it rips off every game,” McInnes said.

“It’s almost like an ulcer on top of my ear now. Some guys can turn it on and off come game time. But I like to train with that intensity so when you come to a game it’s normal.

“I’m also not the biggest guy in the middle, so you need to throw a bit more into everything.”

McInnes, Finucane and Nicho Hynes have all breathed fresh life into the Sharks’ campaign as they remain in the hunt for a top-two spot.

The 28-year-old McInnes played in plenty of derbies wearing the Red V, and while he will always have a soft spot for the joint venture, was able to feel “like a Shark” much quicker than expected.

Because of a season-ending knee injury and COVID forcing the entire competition to Queensland, McInnes completed his rehabilitation with his future teammates.

“The transition happened quicker, and come day one of pre-season training, I had already been here for a bit and knew a few of the guys,” McInnes said. 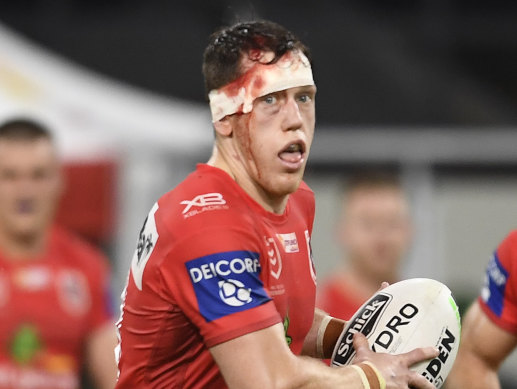 “There is so much depth here that every day has become a challenge to keep your spot. I feel younger again because of it.”

Fitzgibbon said knee injuries always took time to overcome, which made what McInnes was doing extra special, “not to mention at a new club and new position”.

McInnes and Fitzgibbon have immense respect for each other. The player had similar strong bonds with Paul McGregor at the Dragons and Michael Maguire at South Sydney before that.

“The way ‘Fitzy’ sees the game and explains it, I’ve learned so much from him,” McInnes said.

“Sometimes you can try too hard and it is counter productive. Coming off the knee injury, I found myself wanting to do everything and proving myself. You get tired quicker because you waste energy and can be erratic with your thinking. I’ve been guilty of that a few times in games this year. Fitzy keeps things clear, reminds me of what my role is and fixes things.”

Kade Dykes, the son of Cronulla favourite Adam Dykes – and grandson of former Shark John Dykes – will make his debut after “bringing in undeniable form” for feeder club Newtown.