Cameron McInnes will undergo knee surgery on Wednesday but says he is confident the injury that has prematurely ended his time with the Dragons will prolong his career.

As St George Illawarra plan to finally announce the signing of Andrew McCullough to a three-year deal in the next 24 hours, McInnes was coming to terms with the reality that he will not wear the Red V again. 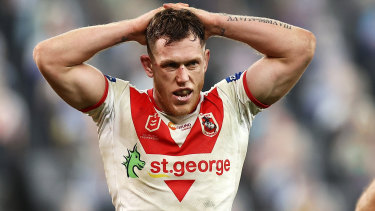 Out for the long haul … Cameron McInnes.Credit:Getty

The 27-year-old fan favourite knew he was in trouble as soon as he lunged to try and tackle a teammate at training on Friday, but says being forced to sit out the entire season with a ruptured anterior cruciate ligament will add a year or two on to his NRL career.

He joked with The Sun-Herald that it was a good thing he had finalised a lucrative four-year deal with Cronulla last week.

“It’s not ideal, but I’m now looking at this as a year to get my body right and hopefully put another year or two on the back end of my career,” he said.

“I suppose when you hear ACL or Achilles, people worry about you. But there are countless blokes who have come back from ACLs and go on to have strong careers. There’s no reason I can’t be one of them.

“Given the grind of rugby league week in, week out, a year without that might be good for me in the long term.”

McInnes was always prepared to honour the final year of his deal at the Dragons, was happy to play lock with the arrival of McCullough and was keen to play a few more games with rookie playmaker Jayden Sullivan, who was a standout in Friday night’s trial against Cronulla.

McInnes has dealt with a series of medial ligament injuries throughout his time in the game, including what was described at the time as a medium to high-grade MCL injury in his left knee at last year’s Nines. It was the same knee he injured this week.

“It was a move I’ve made more than 100 times,” he said. “I went to make a tackle, the person was out of my range, I’ve lunged and, for whatever reason, the knee didn’t like it.

“There’s not always a big reason why these injuries happen.

“I’ve done my medial a couple of times – I hoped it was only a medial, but I knew it was a bad one. I walked off the field and as soon as the physio did the test I couldn’t feel that end point or clunk, so I knew I was in trouble.

“It wasn’t the best feeling.

“It was great to have signed my contract with Cronulla and get my future settled because it had allowed me to put all my focus on what I needed to do for the Dragons this year.

“I really wanted to finish my time here on a high. I’m not out [of the club] for nine months. I’ll do whatever I can to help the boys.

“There have been no tears. I’d imagine as the year goes on it will hit me – it’s all pretty fresh – but this is what being a footy player is.

“Some players are blessed and go through their careers without an injury, but we play a tough sport and this can be one of the trade-offs. I’m blessed to play this game, but I also know nothing comes for free, and this is my trade-off.”

McCullough is expected to be trotted out on the red and white welcome mat on Monday and will have three weeks to get to know his Dragons teammates. Fortunately, McCullough has a long history with Ben Hunt – McInnes’ likely captaincy replacement – and the halfback knows the 31-year-old recruit from the Broncos will add some much-needed experience at the joint venture.

McCullough and Hunt have known each other for about 20 years and played junior representative football together in Queensland.