Adam Goodes may never accept a spot in the Australian Football Hall of Fame but his connection to the Sydney Swans will endure forever, according to ex-premiership teammate Josh Kennedy.

Two-time Brownlow medallist Goodes reportedly told the AFL “no thanks” earlier this year when he was approached with an invitation to be inducted into the sport’s Hall of Fame. 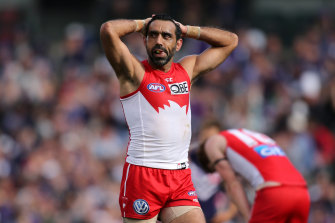 “He is officially a legend of the Swans football club and he would be of the AFL – whether he wants to accept that or not – in our eyes.

“I can’t answer that [if he will ever accept the AFL’s Hall of Fame invitation] on behalf of Adam. I don’t know and it’s not my place to say. But it doesn’t change anything in our eyes, he’s an absolute champion.

“He’d know that he holds a strong place in our hearts and everyone who walks through this footy club. I know in my dealings that he’s got a huge connection still with the footy club and the bloods. I’m sure that will never change.”

Reports of Goodes’ rejection of the AFL’s Hall of Fame offer on Tuesday prompted the AFL to produce a second apology to the two-time premiership Swan for failing to call out the racism that marred the end of his career, and an admission that their first apology in 2019 was far too late.

Another Indigenous icon of the AFL, Carlton’s Eddie Betts, said he could understand why Goodes said no.

“What happened to Adam throughout his last two years of playing AFL footy and stuff that he copped throughout the organisation and through the general public as well, it does leave a scar,” Betts said on AFL 360.

“It leaves a scar and when you talk about racial abuse and would time heal that, time can’t heal racism, that sticks with you forever. When I think about it, I think about every time I’ve been racially abused and it cuts me deep, it really does, it still cuts me to this day and I think it’s going to hurt for the rest of my life. I think what happened to Adam will hurt him for the rest of his life.

“I think people out there have to respect his decision … If you haven’t been racially abused, then you don’t know what it feels like, it cuts you deep and obviously it cut Adam really deep and hopefully people out there can respect the decision that Adam doesn’t want to accept that.”