The NRL's head of football Graham Annesley has slammed players allegedly milking penalties amid a crackdown on crusher tackles, advising those who feigned injury in round 15 to take a "serious look" at their objectives.

Crusher tackles are up 50 per cent this season, and harsher judiciary penalties for the offence were introduced last week.

But with the crackdown came an increase in the number of players grasping at the back of their neck before jumping to their feet after a penalty was blown.

They're doing a great disservice to every other player that plays the game.

Annesley issued a stern verbal warning to all players during his weekly football briefing.

"It's not what our game should be about," Annesley said. "[NRL] is not like a number of other codes around the world where we have serious issues with players playing for penalties … some of it is almost hilarious the way it happens." 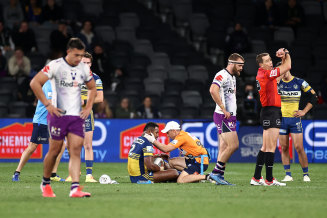 Eels winger Maiko Sivo, who was victim to two crushers during the match, was forced to defend himself after comments made by Storm coach Craig Bellamy. Credit:Getty

Eels winger Maiko Sivo, who was victim to two crushers during the match, was forced to defend himself amid the accusations with coach Brad Arthur labelling the comments “ridiculous”.

Annesley said he had "no doubt" the vast majority of players were acting genuinely when hurt during a tackle, but warned those who weren't were bringing the code into ill repute.

Annesley said the NRL would undertake a full review into the rise of crusher tackles at the end of the season.

The assessment is set to determine the reason for the increase, and why more players are electing to back into a tackle. In Thursday's match, the Eels reversed into the tackle about 80 per cent of the time, which Annesley said was a legitimate tactic.

"In some case, they've turned after the tackle had commenced," he said. "So it's not just simply a matter of, 'we've now got more and more players backing into tackles'. That may or may not be the case."

If the trend continues, Annesley said the NRL may be forced to implement further judiciary penalties.

"That's a possible outcome," he said. "This is not about penalising players, we'd rather not be taking action. We just want to provide a safe environment for them to play the game.

"No one wants to see a serious injury come from these tackles."

Dragons star Paul Vaughan, Eels forward Marata Niukore and Titans prop Moeaki Fotuaika will all miss game time as a result of crusher tackles in round 15.

Annesley said all players will undergo education in the off-season as a result of the trend.

"Each time we have an increase in these tackles, that's increasing the likelihood that we will get a serious injury," he said. "We have enough injuries in our game."