The only thing that was better than Jakob Arthur scoring a try on debut was his proud father Brad punching the air with pride and joy from way up high in the Suncorp Stadium coach’s box.

There were sensational scenes with just four minutes remaining in the Parramatta and New Zealand Warriors clash when Arthur – the 18-year-old gangly debutant, not the Eels boss – stepped off the right foot and sliced through a couple of defenders to score. 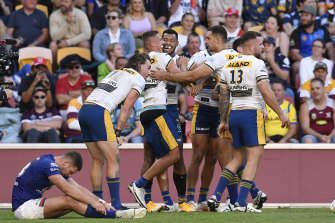 Parramatta celebrate the Jakob Arthur try which all-but killed off any hopes of a Warriors comeback at Suncorp.Credit:Getty

“Some of my mates have driven 10 hours to watch me play. I can’t thank them enough.

“I can’t put it into words. You dream about those things.”

It was not their prettiest win, but it was the fifth straight week Parramatta posted more than 30 points, and they remain outright second on the NRL ladder behind Penrith.

Next Sunday there will be standing room only when the Eels take on Tom Trbojevic’s Manly.

And Arthur will be there for his second game in the No. 6 jersey as Dylan Brown completes his three-match suspension.

Brad shed a tear on Saturday when Jakob was presented his jersey by Mitchell Moses.

Moses was superb against the Warriors but hobbled from the field late in the game.

Arthur was relieved he got through his pre-game press conference without breaking down, and said watching his eldest son go around would be a definite career highlight.

Prior to his late try, Jakob was steady in his first performance in the big leagues, and also had a hand in a couple of tries for Ryan Matterson and Blake Ferguson, which were later disallowed. 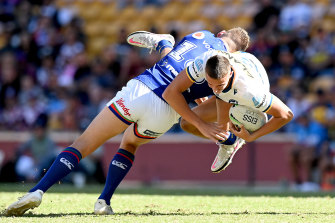 Arthur is lined up by Bayley Sironen of the Warriors during Sunday’s Magic Round clash.Credit:Getty

He could have had another try of his own had he dummied and gone himself, only to play it safe and pass to Matterson who scored his own four-pointer.

Jakob defended well and got his body under Ken Maumalo who was later denied a try because of an earlier obstruction. He was chopped down twice by Chanel Harris-Tavita early in the game, but refused to be overawed by the big occasion.

The Eels raced out to a 24-0 lead, including a rare double to front-rower Reagan Campbell-Gillard, as Moses had a day out.

The Warriors were starved of possession and even when they had the ball struggled to complete their sets.

They trailed 24-6 at the break, but refused to go away in the second half as they slowly worked their way back into the game.

Reece Walsh, who like the younger Arthur is only 18, immediately improved the Warriors attack and came up with a try as the Eels supporters started to get twitchy.

Walsh was released by the Brisbane Broncos earlier this season and was the only player the Wests Tigers were interested in swapping with Billy Walters at the start of the year.

Walsh has an enormous future and is an excitement machine but there was no topping the excitement and emotion of the Arthur clan.