F1 preview: A lap of the Monaco Grand Prix

1.35pm: The pits are closed and that’s it confirmed, Leclerc will be starting from the pits. Devastation for the Monegasque, but those gearbox problems are too much.

It’s Verstappen on the front row on his own now, as the grid will not be shuffled up, with Bottas getting clean air in third.

“We have an issue. We’re not going to the grid,” Ferrari tell FIA race director Michael Masi.

1.30pm: Here’s what Hamilton, the last race winner in Monaco back in 2019, meanwhile had to say yesterday after qualifying only seventh.

“It didn’t feel too bad on Thursday and we made some changes and it was pretty terrible today,” he told Sky Sports F1. “We go back to the drawing board.

“It’s almost impossible to overtake here so…. Up front where we are it’s pretty much the case when everyone is on the same speed. Saturday is the day [in Monaco], so obviously that really does put for sure the win out of reach.

“I guess the minimum would be hopefully seventh and then we’ve got to somehow see how we can move forwards.”

He added on social media: “Failure never feels good but it provides us with opportunities for growth. We have struggled this weekend, for many different reasons but we win and we lose together.

“Tomorrow will be tough, so if you got time, do a little rain dance for me. Let the heavens open.”

1.25pm: Pre-race drama! “No, no, no, the glovebox guys,” Leclerc says on his team radio as he crawls round the track on the formation lap.

Leclerc heads back to the pits and is going through the gears as Ferrari look to get to the bottom of their problems. Will he have to start from the pits?

There’s not long for Ferrari to change the gearbox if they have to. 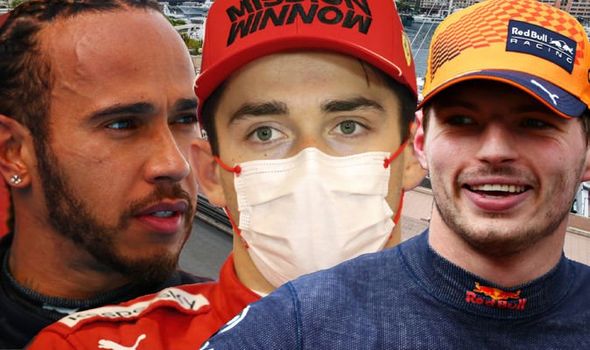 1.20pm: Leclerc’s collision with the barriers, which left him with front and side damage, means today’s starting grid looks like this…

It’s certainly an intringuingly mixed grid. Might we get some Monaco drama after all? Let’s hope so.

“Following further in depth checks this morning, no apparent defects were found on @Charles_Leclerc’s gearbox, therefore the Monegasque driver will start today’s race from pole position, as per the qualifying result.”

Charles Leclerc starts on pole after Ferrari confirmed no gearbox damage to his SF21 despite his shunt into the wall at swimming pool at the end of qualifying.

The Ferrari crash meant Max Verstappen and Valtteri Bottas were denied a chance to snatch pole as the session was red-flagged.

And that means it’s advantage to the Monegasque in Monaco, a tricky notoriously tricky to overtake on.

Of the other big stories, reigning world champion Lewis Hamilton starts well down in seventh after a dreadful Saturday.

The Briton has ruled out taking a race win today but he’ll hope to lessen the damage as Verstappen looks to cut the gap to the championship leader.

Today’s race gets underway at 2pm and we’ll have live lap-by-lap updates for you once the lights are out.