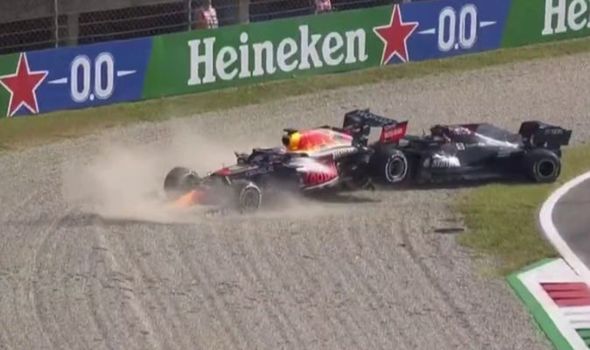 Lewis Hamilton and Max Verstappen are both out of the Italian Grand Prix after a huge crash at the Rettifilo chicane on lap 26 of the race, as the championship battle ramping up once again in Monza. It’s the second time the two have collided, as they crashed heavily into each other at the British Grand Prix.

Tensions were ramping up from the start as Lewis Hamilton fumed on the radio, claiming the Dutchman “pushed him wide” during the opening laps of the Italian Grand Prix.

After starting fourth on the grid, Hamilton got past Lando Norris and was pulling up alongside Verstappen, but the reigning world champion had to back out of the move and ran wide, handing the place back to the McLaren of Norris.

Shortly after the Virtual Safety Car was called out – after Antonio Giovinazzi spun on the first lap and left debris on the track.

“He’s pushed me wide,” Hamilton was heard saying, however the stewards believed there was no investigation necessary between the two.

However, shortly after Verstappen and Hamilton both pitted for new tyres the two title protagonists collided on track fighting for position, with Verstappen’s Red Bull ending up on top of the seven-time world champion’s Mercedes car, with both drivers ending up in the gravel.

Both drivers were able to walk away from the accident, with Verstappen heard fuming on the radio “this is what happens when you don’t leave space, f**king hell”

Both drivers made their way back to the garages with their helmets on, with the safety car brought out for the incident, and as a result plenty of cars headed into the pits with the McLaren of Daniel Ricciardo leading the race.