In an appearance on the PitStop podcast, Scanes revealed he was not a fan of Formula 1 before he started working with Verstappen. “Absolutely not,” Scanes said. “I was googling who Max Verstappen was at the airport whilst I was going to meet him.”

When asked about his relationship with Verstappen, Scanes added: “I always say you couldn’t do this job if you weren’t friends because you spend that much time together that you have to get on with the person you’re working with.

“He’s a good guy, a really down to earth guy. He likes being at home, spending time with family and friends.

JUST IN: Toto Wolff has four drivers who could replace Lewis Hamilton 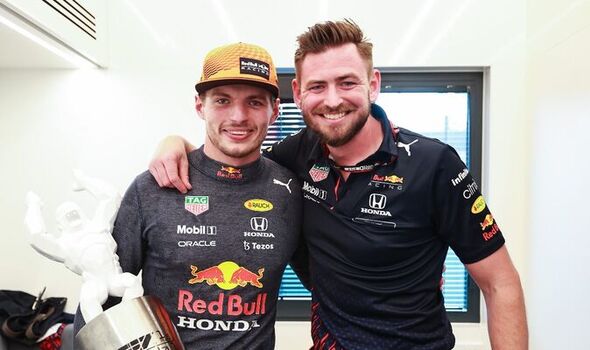 “We have a nice relationship in that we can go for dinner and chat about the football, sit down and watch the football, play a bit of FIFA.” In a separate interview with Red Bull, Scanes explained exactly what his role entails.

“It is really important to be in good shape,” he said. “If not, it can cost you lap time on track.  If in the final laps of a race you are getting fatigued, it can affect you mentally, which can have consequences. Training isn’t his biggest hobby, that’s driving a car.

“But he knows that he has to, and Max is very disciplined. If he has to choose, he’d prefer going for a run and working with weights on his balcony.”