Lewis Hamilton discusses his experience with race at Formula 1

Lewis Hamilton penned a heartfelt message to George Russell after the pair both secured spots on the French GP podium. The seven-time champion finished second for the first time this season, while the 23-year-old notched his first third-place finish since the Azerbaijan Grand Prix last month.

They took advantage of Charles Leclerc crashing out and outperformed Red Bull’s Sergio Perez to finish behind race winner Max Verstappen. Hamilton then took to Twitter to laud his teammate’s performance as well as his own.

“Left it all out there today and P2 is a great result! First time up there with @GeorgeRussell63 as well,” the Mercedes star said. “It’s so rewarding to see how far we’ve come since the beginning of the season. Still have work to do, but definitely going to enjoy this one !!!”

Hamilton jumped Perez at the start, moving into third place, and drove a strong race, holding the Mexican off in the early laps before edging away into a three-second lead by the time of Leclerc’s crash and the safety car. Hamilton was comfortably faster than Perez for the remainder of the race and left him to fight with Russell and Sainz for the final podium place.

JUST IN: Lewis Hamilton falls to the floor in cool down room after revealing French GP issue 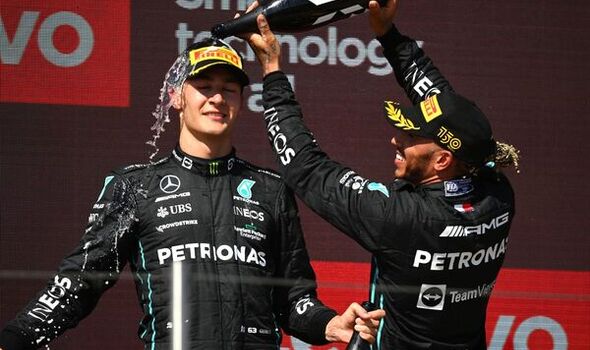 The seven-time world champion added: “It was a tough race because my drinks bottle didn’t work but what a great result considering we’ve been so far off these guys all weekend. Reliability is one thing my team is amazing at so huge congratulations to the team back at the factories and the team here, without them we wouldn’t get this podium. George did an amazing job as well.”

Russell secured the podium finish by producing a nifty move on Perez following the end of the virtual safety car. Russell appeared to be backing off just as the period was ending, but the 24-year-old then accelerated quickly and appeared to catch the Mexican napping as he was able to overtake him on the inside.

“I had to sort of preempt it [slowing before accelerating quickly] and it can go both ways,” Russell told Sky Sports F1. “I knew I had one opportunity when the VSC was ending and if you can time it right and you carry the momentum, you can just carry that through after the VSC. 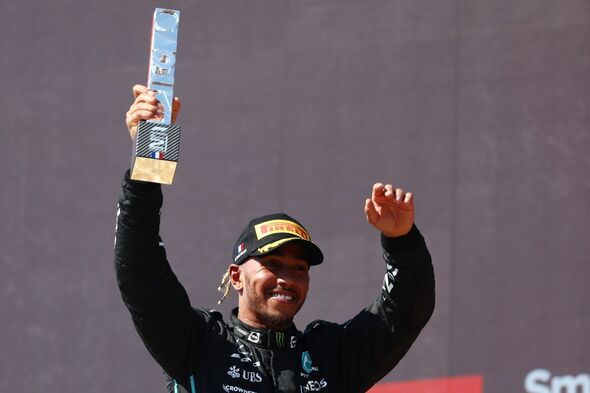 “I think he may have been a little bit too quick and had to brake. So he’s braking, I’m accelerating and that gave me an opportunity.” It was depair for Charles Leclerc yet again as he accepted responsibility for making the “unacceptable mistake” that saw him crash out from the lead of the French GP from pole position.

Asked what happened, the Ferrari star said: “A mistake, a mistake. I’ve been saying I think I’m performing at my highest level in my career but if I keep doing those mistakes then it’s pointless to perform at a very high level.

“I’m losing too many points – seven in Imola, 25 here – because honestly we probably were the strongest car on track today. So, if we lose the championship by 32 points, at the end of the season I will know from where they are coming from. It’s unacceptable, I just need to get on top of those things.”