Lewis Hamilton has once and for all made it clear that he has no intentions of leaving Mercedes at the end of his contract to join Ferrari. The six-time world champion has long been linked with a possible switch to Ferrari, with his next F1 contract potentially being his last.

The possibility of Hamilton leaving Mercedes ramped up last year when reports had emerged the British driver held a meeting with Ferrari chairman John Elkann.

Ferrari CEO Louis Camilleri said at the time that he felt “flattered that Lewis in particular, and other drivers, want to come and join us”.

Him moving to Ferrari would mean replacing Sebastian Vettel as Charles Leclerc signed a long-term contract at the start of the year.

The German though has made it clear that he wants to stay with Ferrari and it was suggested that had ruined Hamilton’s chances of mega-money switch to Ferrari. 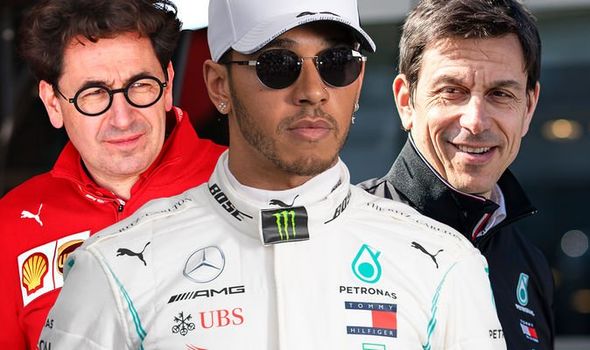 The 35-year-old has kept relatively quiet in regards to those links to Ferrari.

But he now spoken out against the rumours, firmly batting away any suggestion that he plans to leave Mercedes for Ferrari.

In fact, Hamilton goes on to indicate that he plans to sign an extension with his “dream team” at Mercedes.

“First off, there is no dream of a dash to another team,” he said in a post on Instagram.

“I am with my dream team.

“Second, there’s not a thing in my way as I’m not trying to move.

“I’m with the people who have cared from day 1. We are the best team! @mercedesamgf1.”

The 2020 F1 campaign is yet to get underway as the season-opener in Australia was cancelled just days before the race.

The coronavirus pandemic has meant the following eight races on the calendar have either been postponed or cancelled. 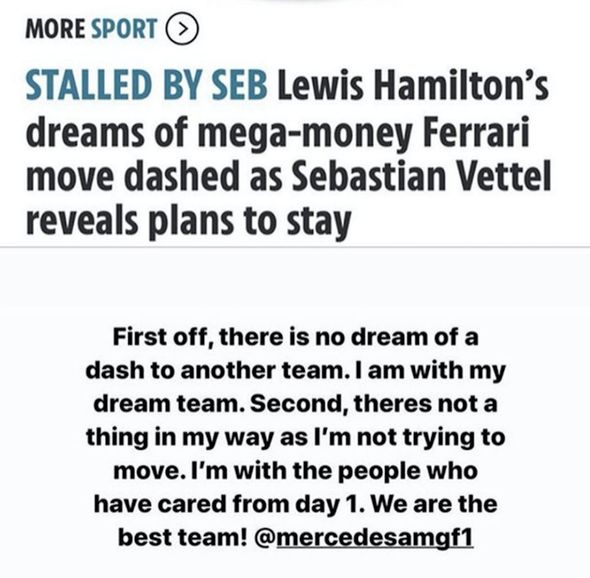 Currently, the French Grand Prix is set to be the first race weekend of the season but decisions are still to be made on whether that will go ahead.

Liberty Media though have been holding on-going discussions with teams on how best to start the 2020 season.

It has been suggested the season could well start in Austria on July 5 with two races to be held at the Red Bull Ring.

And Silverstone has been touted as another possible destination to hold at least two races, although no fans will be in attendance.

This will all depend on how the coronavirus situation develops in the coming months though as lockdown restrictions are slowly lifted.