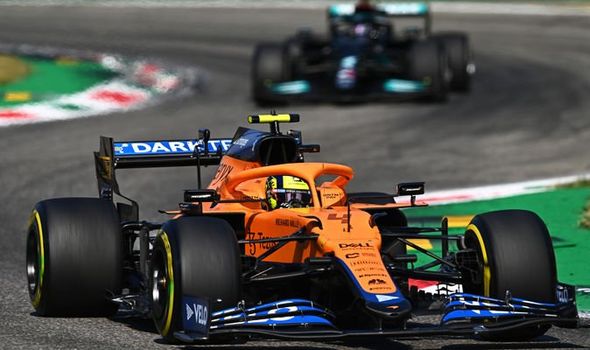 Lando Norris was engaged in a tense fight with seven-time world champion Lewis Hamilton during the early stages of the Italian Grand Prix – and the McLaren star was holding his own. McLaren had a brilliant Saturday as they secured second and third place on the grid during sprint qualifying.

Daniel Ricciardo started alongside pole-sitter Max Verstappen and the former shot out of the blocks to lead the race.

Norris surrendered his place to Hamilton, who was fourth, but regained it when the Mercedes star touched wheels with his Red Bull rival.

Hamilton again set about hunting down Norris but he struggled to overtake his fellow countryman which led to McLaren engineers sending their man a clear message.

“Hamilton is struggling to get close. We’re getting good gaps to the rest of the field,” the chief engineer said over the team radio.

Hamilton was on the hard compound tyres whereas McLaren started the race on the mediums.

However, Mercedes are battling for the Constructors’ Championship so failing to overtake a mid-table team would be cause for concern.