Mark Webber, Daniel Ricciardo and Oscar Piastri; a trio of Australian Formula One drivers whose careers are intertwined, and all part of a contractual triangle that now links the only Australian drivers in the sport for the past 20 years by Webber being involved in altering the career of his successor by negotiating his protégé’s biggest break.

Reports out of Europe indicate Piastri, 21, will be named as Ricciardo’s replacement at McLaren for next season, with the team needing to reach a financial settlement with eight-time grand prix race winner Ricciardo to not drive for them next season, the 33-year-old under contract until the end of 2023. 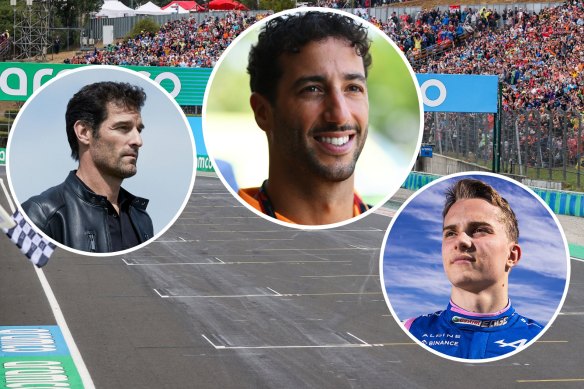 Forget Drive to Survive; this is genuine F1 high drama, the type Netflix can only dream of. It’s a tale of ambition, high-stakes manoeuvrings, broken promises and fulfilled dreams, and one where legacy lurks in the background.

Australians in F1 are rare; just 14 Australian drivers have started a grand prix in 73 years. When Piastri becomes our 15th, will Ricciardo be an on-track rival? And how does Webber, once Ricciardo’s predecessor at Red Bull Racing and these days Piastri’s manager, fit into the equation?

It all seemed so simple. Four-time world champion Sebastian Vettel arrived at the Hungarian Grand Prix to announce that his 2022 campaign with Aston Martin would be his last, revealing he was retiring.

Vettel vacating his seat was little surprise, but the announcement of his replacement – 41-year-old Alpine driver Fernando Alonso – the day after the race in Budapest was such a shock that Alpine only became privy to the news when Aston Martin’s press release landed.

In the weeks leading up to Hungary, it appeared a formality that Alonso would continue with the team he won two world titles for when it was known as Renault in 2005-06.

However, when Alpine’s offer of a one-year deal with a one-year extension on the team’s side was trumped by a cast-iron two-year contract from Aston Martin, Alonso was out – and chaos was in.
All season, it was assumed the pathway for Piastri – Alpine’s reserve driver – would be determined by Alonso’s plans. If Alonso moved on, the Melburnian would be slotted into an Alpine race seat for 2023 alongside incumbent driver Esteban Ocon. If Alonso continued, Alpine – who have invested a significant sum of money in a testing program for Piastri to fast-track his development – were keen for the 2021 Formula 2 champion to race in F1 next season, preferably with a loan arrangement to the Williams team. 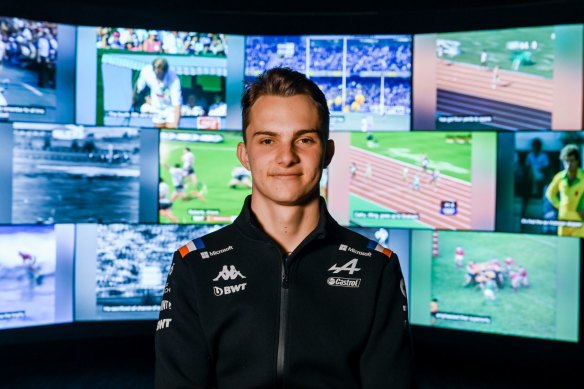 Teams farming out drivers to rival outfits further towards the back of the grid is commonplace in F1. Mercedes driver George Russell cut his F1 teeth with Williams, while Ferrari’s Charles Leclerc got his early reps with Alfa Romeo.

But behind the scenes and well before the Alonso/Aston alliance, Webber’s plans for Piastri were quietly crystallising – and at a time when Ricciardo’s second season at McLaren was heading down a similarly miserable path to his first. Alonso’s bombshell brought them to the surface.

Ricciardo, in the second year of a three-season deal with McLaren that has the third year as an option – crucially, on his side – was labouring through another difficult campaign by the time the 2022 season shifted to Monaco. On that May weekend, McLaren Racing CEO Zak Brown suggested there were break clauses in Ricciardo’s contract, adding “there are mechanisms in which we’re committed to each other, and mechanisms in which we’re not”.

The public questioning of Ricciardo’s tenure escalated tensions, with McLaren responding by reiterating they were keen to help Ricciardo rediscover his mojo. But talk of Ricciardo’s future never went away, and after an eighth-place result in July’s Austrian Grand Prix, Ricciardo made a rare appearance on social media to quash rumours that his barren run would see him walk away at the end of the season, none-too-subtly referencing that he – not McLaren – held the option on his 2023 contract. The timing was no accident. 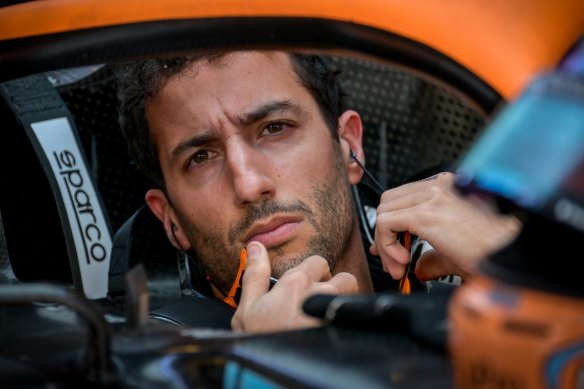 “Could the delay be that (Piastri) and his manager Mark Webber are looking at potentially replacing Daniel Ricciardo at McLaren,” Kravitz posited?

“As every race goes by and points and performance fail to come in for Ricciardo, maybe McLaren will come in with a late offer for Piastri, nick him from under Williams’ nose and offer him Ricciardo’s seat for 2023.“

Fast-forwarding to this week, Vettel’s Budapest retirement announcement and Alonso’s shock switch to Aston Martin opened the door at Alpine for Piastri to race for the team he’s been embedded in this season. Alpine issued a press release the day after Alonso’s defection announcing Piastri as a race driver for next season – but without quotes attributed to Piastri. It was the reddest of red flags.

Hours later, Piastri tweeted “I will not be driving for Alpine next year”, a remarkable rejection of a race seat for a rookie driver.

With so few vacant seats available at other teams for next season, it was clear that Webber already had Piastri pegged for a drive elsewhere, with Alonso’s plans of little consequence.

Later in the week, it came to light McLaren had formally told Ricciardo after Hungary that he was no longer their preferred choice for 2023. The Australian has no intention to agree a suggested move to McLaren-owned teams in IndyCar or Formula E, wanting to extend his F1 career into a 12th season.

As reports out of Europe all-but confirmed Piastri’s ascension to a seat with McLaren, the team – along with Piastri and Ricciardo’s camps – were tight-lipped. Put simply, McLaren will need to pay Ricciardo off to make way for Piastri, with discussions over the details of a financial settlement putting a handbrake on any official announcement.

So what happens now?

Alpine had indicated it would do everything in its power to make Piastri honour a contract it says is watertight and contains options for 2023 and 2024, asking the dispute to be settled by F1’s Contracts Recognition Board (CRB). However, European-based news outlet RacingNews365 reported the CRB has already validated Piastri’s McLaren contract, allowing it to stand over the deal Alpine believed it had.

What’s less clear is what becomes of Ricciardo’s future when Piastri, as now expected, is announced at McLaren before the resumption of the season in Belgium at the end of August. Whether Ricciardo finishes the 2022 season with the team under such awkward circumstances remains unclear, while Piastri’s McLaren deal – which doesn’t kick in until 2023 – prevents him from being an option for this year’s remaining 10 races.

The twists in this tale don’t stop there, either. With Alonso elsewhere and Piastri a non-starter, Alpine may yet open its arms to a Ricciardo return in a marriage of convenience.

While bright spots have been few for Ricciardo at McLaren, he won the team’s only race since 2012 when he took out last year’s Italian Grand Prix. Despite his fall in form, Ricciardo remains one of F1’s most marketable drivers, particularly in the United States.

The legacy, and the future

Should Ricciardo renew ties with Alpine, next season will be the first since 2013 – Webber’s final campaign in the sport – where Australia has two drivers on the F1 grid. That those two drivers had a link to the retiring Vettel both then and now is yet another bizarre sub-plot.

Events of the past week ensure that when Piastri gets his start – given how he got his place on the grid – his rookie season will be watched like no driver before him.