Formula One world champion Lewis Hamilton won the Portuguese Grand Prix for a 97th career win on Sunday and extended his championship lead over Max Verstappen to eight points.

The Mercedes driver started from second on the grid behind teammate Valtteri Bottas, who finished third behind Verstappen’s Red Bull and took a bonus point for the fastest lap. 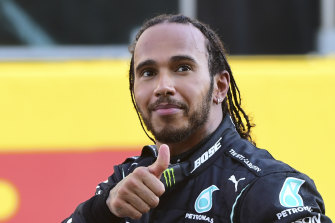 Hamilton and Verstappen have been in the top two in all three races, with Hamilton winning two of them heading into next Sunday’s Spanish GP.

Bottas took pole to deny Hamilton a record-extending 100th, making him the third different pole-sitter so far after Verstappen and Hamilton.

He made a clean start to hold off Hamilton and Verstappen but then slipped behind.

The safety car came out on lap 2 of 66 for debris on the track when veteran Kimi Raikkonen lost his front wing and went off into gravel after clipping the left rear tire of his Alfa Romeo teammate Antonio Giovinazzi.