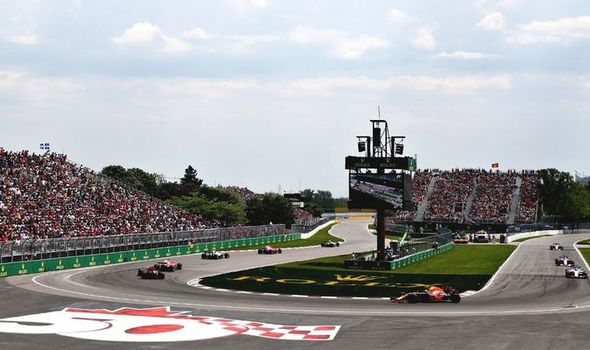 Canadian Grand Prix fans will get to witness a race in Montreal this year with F1 chief executive Chase Carey determined to reschedule June’s axed meet. The start of the 2020 F1 season was again pushed back on Tuesday as the June 12-14 trip to Canada became the latest sporting victim of the coronavirus pandemic.

A statement released by Canadian Grand Prix organisers read: “This postponement was not a decision that was taken lightly or easily.

“Over the past month, we have been in constant communication with Formula 1 and representatives from the city of Montreal, Tourism Montreal and both provincial and federal governments.

“We have heard the directives issued by public health officials and as a direct result of the Covid-19 pandemic are following the expert guidance provided by the authorities.

“Our thoughts and most sincere thanks go to the men and women working tirelessly to keep us healthy, safe and fed during these uncertain times.”

The Canadian Grand Prix, where Lewis Hamilton came out on top last year, follows races in Bahrain, Vietnam, Holland, Spain and Azerbaijan in being postponed.

The Australian, Chinese and Monaco Grands Prix have, meanwhile, been cancelled and the 2020 season is now officially due to start in France at the end of June.

Three weekends in August have been freed up for racing by bringing forward the annual shutdown from August, while there is scope to run two-day race weekends and extend the season beyond the current November 29 end date.

Carey, who is supportive of the decision to postpone June’s meet, has promised Canadian Grand Prix fans that F1 will return to Montreal when it is safe to do.

“We have been working closely with our friends at the Canadian Grand Prix over the past few weeks and support them in taking this necessary decision to ensure the safety of fans and the F1 community,” Carey said.

“We always look forward to travelling to the incredible city of Montreal and while we will all have to wait a bit longer, we will put on a great show when we arrive later this year.”

We’ll be bringing you the very latest updates, pictures and video on this breaking news story.
For the latest news and breaking news visit:  /sport/f1-autosport
Stay up to date with all the big headlines, pictures, analysis, opinion and video on the stories that matter to you.
Follow us on Twitter @DExpress_Sport – the official Daily Express & Express.co.uk Twitter account – providing real news in real time.
We’re also on Facebook @DailyExpressSport – offering your must-see news, features, videos and pictures throughout the day to like, comment and share from the Daily Express, Sunday Express and Express.co.uk.