Alex Albon endured a nightmare Free Practice 2 session at Silverstone on Friday afternoon as he lost control of his Red Bull while going through Stowe. The Thai-Brit driver went flying off the track during the high-speed right-hand turn and spun as he tried to control the RB16.

The rear end and the left side of the Red Bull picked up significant damage as it went crashing into the barriers, leaving Albon shaken and meaning the session was stopped.

In a clip from team radio, Albon said he lost the rear end of the car, which has been a problem Red Bull have been trying to fix since the season-opening Austrian Grand Prix.

His team-mate Max Verstappen, meanwhile, had been left fuming minutes earlier when Romain Grosjean got in his way during a hot lap.

The Dutchman let out an expletive-laden blast at the Haas driver on team radio and waved his fist after being stopped from laying down another time sheet-topping lap at Silverstone.

Grosjean was picked up on Haas team radio sarcastically replying: “Oh, I did it on purpose. That’s so ******* childish. So childish”.

Red Bull are looking to pick up their first win of 2020 at this weekend’s British Grand Prix, where Mercedes are expected to dominate.

Albon is delighted to be back in the UK following a triple-header of races in Austria and Hungary.

“I feel pretty good!” Albon said. “Obviously as a team it hasn’t been an ideal start to the season but aside from the DNF, we’ve been able to score some good points. 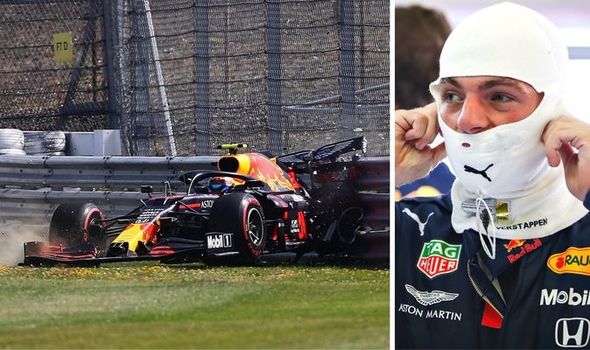 “I think with that being said, the car can only improve so I’m feeling positive. We know the areas we need to work on and with Silverstone being a home race close to the factory, that’s good news.

“I think we can hopefully get a good result there, historically it’s been a pretty good track for the team, and it’s one I really enjoy driving.”

Albon is eager to perform better on Saturday having only qualified in 13th for the Hungarian Grand Prix.

“Hungary was a lot of fun but obviously we don’t want to start that far back again,” Albon said. “I think we have a very good race car, so once we get on top of our Saturday qualifying trim, we should be in good stead for the Sunday races.

“Hungary was a fun race, it’s not the easiest track to overtake at so to pull off the passing moves and get so far up the grid was pretty satisfying.”