Travis Hamonic of the Calgary Flames is the first NHL player to opt out of the NHL's restart.

Hamonic, a 29-year-old defenseman in his 10th NHL season, cited his young daughter's battle with a respiratory illness in 2019 as being a key factor in his decision.

"Like every parent, everything we do is to provide and protect our kids and try to take away any suffering they may endure," Hamonic wrote in a statement explaining his decision posted by Titan Sports Management.

"Last year, we spent the longest, scariest and hardest week of our lives by our daughter's hospital bedside. We were unsure of what would come next or where this would lead, but with God's strength our little girl fought her respiratory virus and recovered. During that long week, we were helpless and couldn’t do anything to help her except hold her little hands, kiss her head and pray. We saw what a respiratory virus can do to our healthy little girl and it’s something no parent wants or should go through. Now blessed with our second child, a baby boy at home, the risk of today's COVID-19 pandemic is a very difficult one to weigh as parents.

"Due to what my daughter already has gone through and the concerns if she were to catch COVID-19, I’ve decided to opt out and seek a leave of absence from the Calgary Flames for the remainder of the playoffs. I wish I could lace up my skates and be out there battling, blocking a shot and helping the team win but my family has and always will come first. Being my little kids’ dad everyday is the most important job I have."

Said the Flames, who first announced Hamonic's decision: "While we will miss Travis in our line-up, we understand and respect his decision."

The NHL and NHLPA finalized the return-to-play plan Friday. Players have until Monday to opt out, which is also when training camps are set to open.

Games are set to restart in Canada in Edmonton, Alberta (the Western Conference teams) and Toronto (the Eastern Conference) on Aug. 1. The Flames are playing the Winnipeg Jets in the "qualifying round." 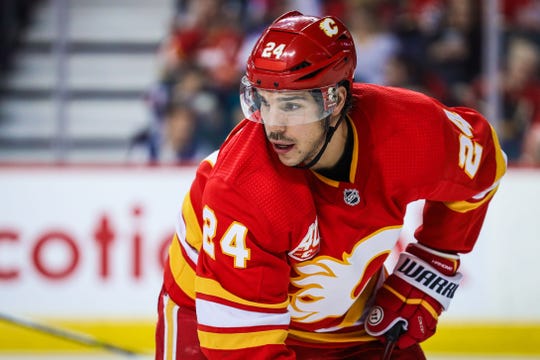 In January 2019, Hamonic's then-8-month-old daughter was rushed to Alberta Children’s Hospital as she dealt with her illness.

"Everything goes out the window," Hamonic told the Calgary Sun of the situation at the time. “My wife and I haven’t left her side, we’ve been sitting in the room with her 24/7 and we probably won’t leave her side, even when she’s 50. We play a game for a living and it’s my job and I take my job seriously. But my daughter is the most important focal point in my life."

The veteran defenseman had three goals and nine assists for the Flames in 50 games this season, his third with the team. He spent the first seven years of his career with the New York Islanders.