A former major league pitcher was killed Friday morning when the plane he was piloting crashed in the Wasatch Mountains south of Salt Lake City, according to authorities in Utah.

Tyson Brummett, 35, was piloting a Cessna 172 that took off from South Valley Regional Airport in West Jordan when it crashed in American Fork Canyon, according to the Utah County Sheriff's Office.

Brummett, his friend Alex Ruegner, 35, and Ruegner's uncle and aunt, Douglas Blackhurst, 62 and Elaine Blackhurst, 60, died in the crash.

Brummett appeared in one major league game, retiring two batters in a 2012 game for the Philadelphia Phillies, who drafted him in the seventh round out of UCLA in 2007. 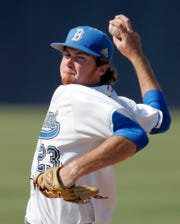 Tyson Brummett throws during a 2007 game when he was a member of the UCLA Bruins. (Photo: Mark J. Terrill, AP)

He was claimed off waivers by the Toronto Blue Jays after the 2012 season and pitched in their minor league system in 2013, and for the Los Angeles Dodgers' Class AA club in 2014, before he was released in August 2014.

Brummett's plane crashed at an elevation of around 8,500 feet, and all four victims appeared to be killed on impact, according to the sheriff's office.

The crash was witnessed by hikers in the popular recreation area.

I just want you guys to know. Tyson was an incredible baseball player. An unbelievable teammate. And an even better person. I am proud to have even known him, let alone call him a friend. He was [email protected]@bdeano4#BruinFamilyhttps://t.co/imo6RdR46w

The National Transportation Safety Board said in a tweet that it is investigating the crash.