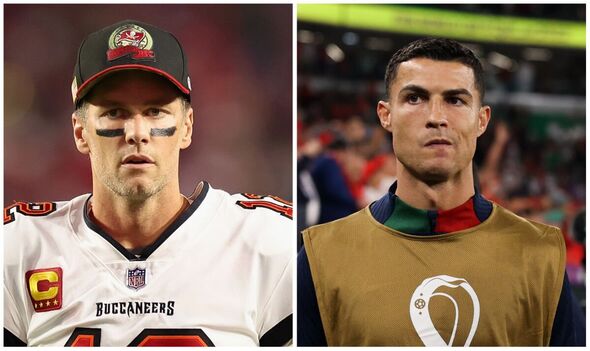 NFL megastar Tom Brady has joined Cristiano Ronaldo in an exclusive club by spending more than half of his lifetime at the elite level of sport. Brady was drafted by the New England Patriots 8,292 days ago – the same amount of time he’d been alive prior.

Brady has arguably achieved the greatest career in NFL history, having won seven Super Bowl rings – six with the Patriots and one with the Tampa Bay Buccaneers.

On Thursday, however, he achieved one of the most impressive feats of his career, having been in the NFL for half his lifetime. Brady had been tipped to retire next year, but appears to be likely to stay in the league and move teams instead.

Ronaldo, on the other hand, has hit the same milestone despite not currently having a club. The Portuguese icon was released by Manchester United during the World Cup break, having spent just over a year back at Old Trafford after his 2021 return.

The legendary striker spent 7360 days playing professional club football prior to his release from United, well over half of his life until that point.

Ronaldo is expected to sign for Saudi Arabia side Al-Nassr in the coming weeks, with reports suggesting the deal could be made official on January 1 when the transfer window opens.

Brady, meanwhile, is unlikely to stay with the Buccaneers, and is instead expected to leave in free agency at the end of the season. He has been tipped to return to the Patriots, but a move to the Las Vegas Raiders has also been touted.

The Raiders this week benched quarterback Derek Carr, and announced they would start Jarrett Stidham as his replacement, with Chase Garbers as his backup. Carr is expected to leave at the end of the season, freeing up a potential spot for Brady to reunite with head coach Josh McDaniels – his offensive coordinator at the Patriots.