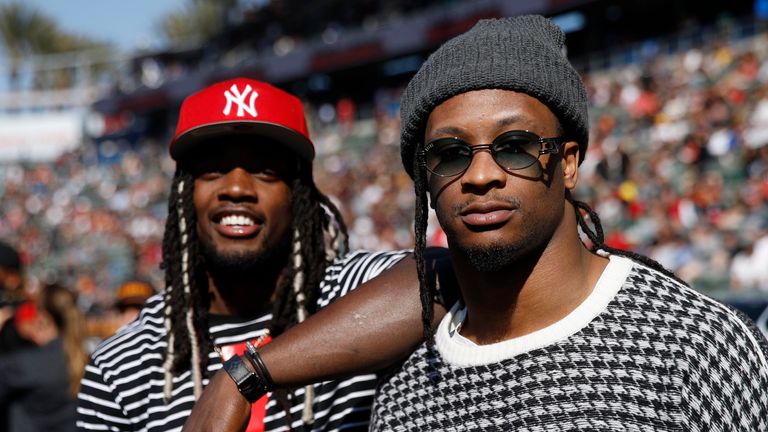 Free agency served up a stark reminder of an NFL running back’s uncertain shelf life as Todd Gurley and Melvin Gordon both moved onto new teams.

Gurley was released by the Los Angeles Rams and subsequently signed for the Atlanta Falcons on a one-year deal, just two years after being made the highest-paid running back in the league with a four-year, $60m contract extension.

The Los Angeles Chargers meanwhile shipped Gordon to the Denver Broncos, the Wisconsin product signing a two-year, $16m contract and teaming up with Pro Bowl running back Phillip Lindsay, who has produced successive 1,000 yard rushing seasons.

“It didn’t look like he (Gurley) was running with the same juice at all last year,” said two-time Super Bowl champion Rob Ryan on Inside The Huddle. “He did everything in Georgia, much like Melvin Gordon carried the ball a million times in Wisconsin, and eventually those carries add up and now it’s taken its toll on him in the National Football League.

“Really today’s football, that half-back position is almost a two-man job now, it’s not just one guy. That’s why I think Denver were smart on getting Melvin Gordon.

“Now they have two backs they can hammer the football at you with, they can both catch the ball out of the backfield. I think it’s good. The two-headed monster day has kind of taken over.”

Gurley’s production decreased significantly in 2019 as he recorded a career-low 857 rushing yards for 12 touchdowns, while seeing 2018’s haul of 580 receiving yards for four touchdowns drop to 207 yards for two touchdowns. He is now looking to reignite his career back in Georgia, where he played college football for the Bulldogs. It was there where he tore his ACL in a game against Auburn, with the injury having since become a recurring talking point surrounding his longevity in the NFL.

Ryan added: “It will be interesting to see what kind of player Todd Gurley is because I promise you this, one thing about professional football players is they can get motivated again.

“They can get that juice lit up again and a lot of times a change of scenery will do that for you so I think Gurley going back to where he had all that success at Georgia, this will be an interesting year for him. And they still have Matt Ryan and all those weapons outside so it should be a pretty good offense.” Devonta Freeman also landed on the market after being released by the Falcons, while David Johnson was traded to the Houston Texans by the Arizona Cardinals having signed a three-year, $39m contract extension in 2018.

“It’s not a long-term position,” explained Jeff Reinebold. “The hits start in high school, because they’re going to be the featured back and the best player on the field.

“You start adding it up and there’s only so much physically your body can take and it’s a position where you’re going to get hit all the time. I think one of the reasons we see the two-back system as much as anything else is because of the health factor and longevity factor.”

Reinebold cited Gordon’s arrival in Denver as an early warning to Lindsay as he looks to cement his future in the league and beyond.

“The fact you’ve got two guys, you can spread the carries, spread the hits a guy is going to take and hopefully you’ll be able to manage the load on your player and keep him in the league longer,” he added.