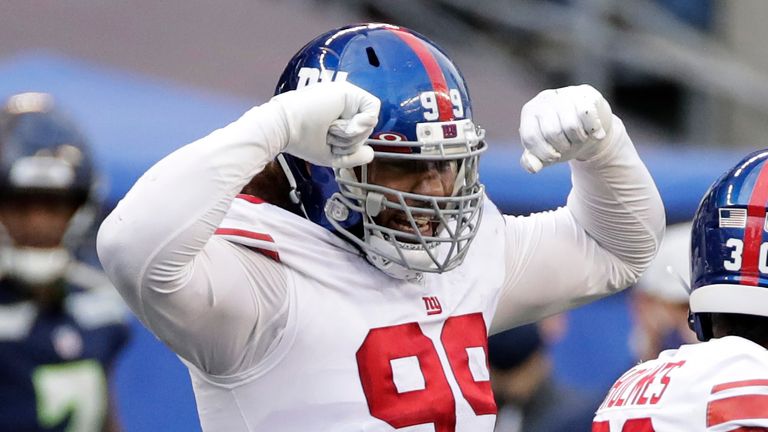 Leonard Williams agreed to a three-year, $63m deal with the New York Giants, according to multiple reports on Tuesday.

The Giants removed the franchise tag exercised before last week’s deadline to lock up their defensive line anchor for multiple seasons.

Williams and the Giants reportedly negotiated intently for multiple days and settled on a shorter three-year deal that includes $45m guaranteed and a $22.5m signing bonus.

Signing Williams provides needed cap room for the Giants. If the Southern California product would have played on the tag in 2021, he would have counted $19.3m against the salary cap. That number now drops into the neighborhood of $11m.

The 26-year-old was acquired from the New York Jets in 2019 and played the 2020 season on the franchise tag for defensive tackles worth $16.1m. The sixth overall pick at the 2015 Draft spent the first four seasons of his career with the Jets.

Williams is coming off his most productive season yet having racked up 11.5 sacks and 57 tackles in 16 games.

The Giants didn’t hesitate in carrying out more business on the back of tying down Williams as they agreed a one-year, $2.5m deal with former Cincinnati Bengals wide receiver John Ross.

Ross was selected as the ninth overall pick at the 2017 Draft after setting a new record in the 40-yard dash at the Scouting Combine with a time of 4.22,

Injuries have since proven a major hindrance, with Ross playing just 27 games in four seasons and posting a total of 51 catches for 733 yards and 10 touchdowns.

His best season came in 2019 when he recorded 28 receptions for 506 yards in eight games, which he struggled to follow up in 2020 as he managed just two passes for 17 yards in three outings.

With the Bengals having declined his fifth-year option, Ross revealed on social media in October that he had requested a trade.

Still just 25-years-old, he arrives in New York with an opportunity to resurrect his career.