BALTIMORE — They are professional athletes, so merely competing won’t be enough for Eduardo Rodriguez and Trey Mancini.

One day, Rodriguez hopes to build back to his form of 2019, when the Boston Red Sox hoped to earn their lefty his 20th win on the final day of the season, only for the bullpen to blow a lead against Mancini’s Orioles.

Weeks, perhaps months from now, Mancini would like to make contact with pitches and lift the ball and see his body persevere through a 162-game season as it did all the way to the end of 2019, when he slugged 35 home runs and the Orioles knew they’d have several more years to build around their affable slugger.

They went their separate ways after that final game at Fenway Park, neither with any inkling that 2020 would bring not glory but fear, not sparkling statistics but rather an ugly red line on their stat sheets, a nonexistent year in the baseball world.

In the real world, not within baseball’s metrics but rather their own personal nightmares, Mancini was felled by a stunning spring diagnosis of Stage 3 colon cancer, the removal of a malignant tumor, the hell of chemotherapy.

Five months later, it was Rodriguez walking away from Red Sox summer camp on Aug. 1, unable to respond to the physical rigors of pitching after a bout with myocarditis, the most damaging and potentially deadly aftereffect of COVID-19, which four days after Mancini’s March surgery was declared a global pandemic.

Those parallel challenges were fought in rehab and doctor’s offices and in their own mental challenges of a comeback, until finally, Thursday afternoon, Rodriguez was able to climb a mound and throw a pitch in a major league game, one that happened to be Mancini’s first at Camden Yards since his life changed forever. 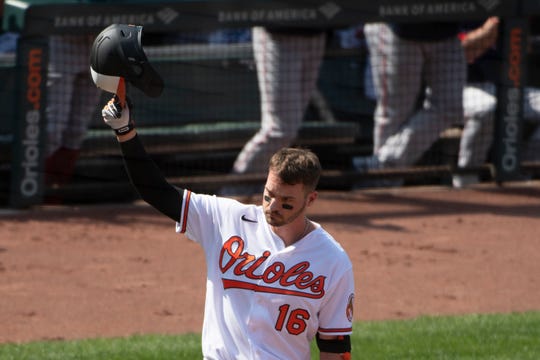 And as Mancini lurked on deck and Rodriguez prepared to pitch, the 28-year-old Venezuelan was overcome.

“It felt like my first day in the big leagues. My body was all chills,” said Rodriguez, beginning his sixth major league season. “When I looked around the ballpark it felt like was making my major league debut.

“And when I saw the leadoff hitter, that’s when I started feeling the chills on my body.”

Those feelings shifted after Cedric Mullins singled, and Mancini strolled to the plate.

Mancini, 29, was admittedly startled by the reception when he was introduced before the game. His first at-bat ultimately hit home for both men.

The crowd rose to their feet, a pandemic-stunted gathering of 10,150 sounding, as Mancini put it, “like a full stadium.” Sensing the moment, Red Sox catcher Christian Vazquez and Rodriguez feigned a mound visit to let the moment ride, and Vazquez and Mancini tapped each other in the chest.

Suddenly, the connection between Mancini and Rodriguez emerged.

A grueling journey, but what a [email protected] is back where he belongs. pic.twitter.com/StAgcaUaIV

“I saw Mancini coming up,” says Rodriguez, “and they gave him the round of applause, he pointed straight to me, and he (tapped) on his chest, pointed to me and said, ‘Are you good?’

“It was special that he remembered that I was having some issues too, last year. It was really special for me to see him back, too after everything he went through.

“I gave him time, and he gave me that sign, too. It just feels really good, me and him to be back on the field again.”

The business of baseball reared its head soon enough. Rodriguez gave up a two-run home run to Ryan Mountcastle, and another homer in the fourth inning to Pedro Severino.

Rodriguez paused to stare at a replay of the latter home run, shaking his head at the pitch location.

In the third inning, he’d get Mancini to chase a changeup outside the strike zone for one of his seven strikeouts, and Mancini flexed his bat across his helmet in frustration.

Their nitpicking seemed somewhat absurd, given Mancini was exactly 360 days removed from starting chemotherapy, and Rodriguez slowed by his myocarditis and then a dead-arm period in spring training.

Yet both players, having fought for their lives, are now fighting for their livelihoods. Rodriguez is a potential free agent after this season, Mancini two years from that status.

Mancini was mired in a 1 for 18 slide, with nine strikeouts, until an eighth-inning single, before which he admittedly tried to take a load off his shoulders.

It is wonderful when everyone is rooting for you, save for the expectations they may create, internally and externally.

“It’s probably been four of the most challenging games I’ve ever gone through in my career,” he said of Thursday’s game and a three-game Yankee Stadium struggle that followed his season debut at Boston. “I expect a lot out of myself. I think I’ve been going out there with a lot of pressure on my shoulders in trying to perform so much and prove that I’m the same guy.

“I know I am; I don’t think I’ve gone about these last four games the same way. In that regard I’m not pleased. I feel like I’ve played a month’s worth of games in a week.”

Thursday was smoother for Rodriguez.

He fought off those early nerves, gave up three runs and did not walk a batter through five innings, cashing in the 7-3 win when Boston pushed two runs across in the top of the sixth.

Moments earlier, after inducing a groundout from Mancini to end the fifth inning, he was met by Cora at the top of the Red Sox dugout and wrapped in a hug.

“He just gave me a big hug and said, ‘Congratulations, kid, for everything you’ve been through. You did a really good job today,’” Rodriguez said. “It was emotional for he and I.” 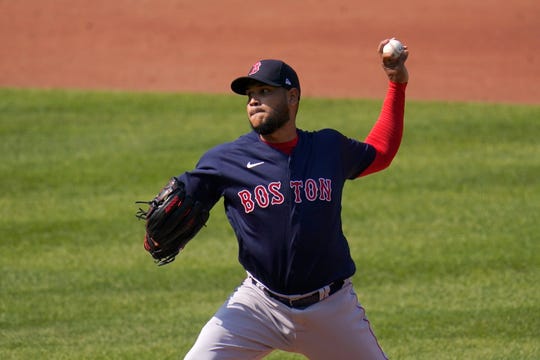 Moments later, Rodriguez’s wife, Catherine, would ring his phone in the clubhouse. Such calls are typically verboten, but this was not a typical afternoon.

“I told her, ‘Baby I can’t talk right now,’ ” Rodirguez said, “because the game was going on. But she was really happy, and I was happy she was happy, too.”

Later, Cora would gather the Red Sox and salute Rodriguez in the clubhouse, as if he was, in fact, that rookie getting his first win.

It was actually his 52nd, not including a handful of key playoff appearances in the Red Sox’s march to the 2018 World Series.

Rodriguez’s 2020 absence means Cora is the only manager he’s played for, back for a return engagement after the manager’s one-year banishment for his role in the Houston Astros’ sign-stealing scandal.

Before Rodriguez’s last start of 2019, Mancini would hit his 86th career home run, at Fenway Park. He’s still stuck on that number, and with all the bouquets thrown his way, he cherishes a return to normalcy, a world where he clubs moonshots over fences and is just another face in the clubhouse.

First, though, came Thursday, and a reception he said exceeded all expectations.

“I’m somebody who doesn’t love a lot of attention and the spotlight,” Mancini said. “It can be a little challenging but at the same time, you have to remember why they’re cheering for you.