Vizquel, 53, was booked in January 2016 on charges of fourth-degree assault in King County, Washington, The Athletic reported Wednesday, following an incident in which his wife, Blanca, suffered injuries that were photographed by authorities. Vizquel was not prosecuted for the incident.

MLB's investigation into the incident is ongoing, according to a person with direct knowledge of the situation. The person spoke to USA TODAY Sports on condition of anonymity because the matter has not been resolved. 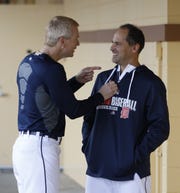 Omar Vizquel, 53, was booked in January 2016 on charges of fourth-degree assault in King County, Washington, according to The Athletic. (Photo: Julian H. Gonzalez)

Vizquel was never prosecuted for the incident, but Blanca has initiated divorce proceedings and discussed further allegations of abusive behavior in a Telemundo interview. Vizquel denied Blanca was leaving him due to domestic violence in an interview with a Venezuelan outlet.

The Athletic reported that Vizquel coerced Blanca into signing a letter to the prosecuting attorney that refuted the the reported events on the night of his arrest, a charge Vizquel denied.

Vizquel is not currently employed by a major league club. He was the Tigers' first-base coach in 2016 and most recently managed the Chicago White Sox's Class AA team in Birmingham in 2019.

Vizquel was a three-time All-Star in his 24-year major league career, compiling 2,877 hits and earning recognition as perhaps the best defensive shortstop of his generation. He is entering his fourth year on the Hall of Fame ballot, his support growing to 52.6% in 2020, shy of the 75% needed for induction.