It was not a unanimous decision by any means.

It may not have even been the choice of the general manager.

No, we’re not talking about the Chicago White Sox and Tony La Russa.

This is about Alex Cora, who is being rehired as manager of the Boston Red Sox, according to a person with direct knowledge of the situation.

The person spoke to USA TODAY Sports on the condition of anonymity because the club had not yet made an announcement.

And you thought the George Steinbrenner and Billy Martin days with the Yankees were crazy times?

Remember when Red Sox GM Chaim Bloom announced the final day of the season that Ron Roenicke would be out the door, and when specifically asked about Cora, said that “he’s not on or radar"?

That time is now.

Bloom will now have to explain how he interviewed nine candidates, narrowed it down to three finalists, had his personal favorite in Sam Fuld, and still hired Cora.

And, of course, the choice by those who write Bloom’s paychecks.

The Red Sox ownership acknowledged that Cora had to go when he was implicated in MLB’s investigation into the Houston Astros in 2017, costing A.J. Hinch his job, too. MLB investigated the Red Sox as well and while investigators found no wrongdoing by Cora in Boston, he was suspended for his actions in Houston, with the investigation determining that Cora was an “active participant in the scheme” and that he “implicitly condoned the players’ conduct.” 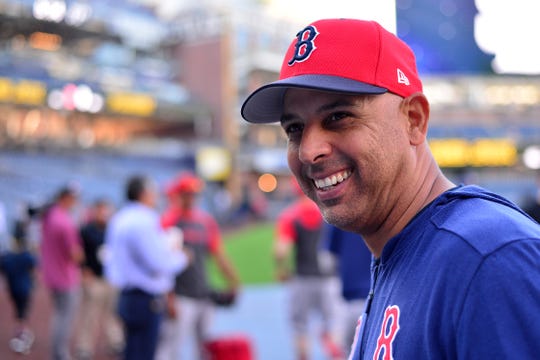 Astros GM Jeff Luhnow, who was fired in the scandal and still is unemployed, also blamed Cora in a January statement.

“The sign-stealing initiative was not planned or directed by baseball management,’’ Luhnow said. “The trash-can banging was driven and executed by players, and the video decoding of signs originated and was executed by lower-level employees working with the bench coach (Cora).

“I am deeply upset that I wasn’t informed of any misconduct because I would have stopped it.’’

The Red Sox and MLB stopped Cora, but all he missed was 60 games in a dreadful Red Sox season. They finished with a 24-36 record. It was the worst winning percentage since their 62-100 season in 1965.

So, instead of being punished, Cora caught a break, and won’t have that 2020 season sullying his resume.

Remember Cora’s words in January when he left the Red Sox, saying, “I will forever be indebted to the organization and the fans who supported me … This is a special place. There is nothing like it in all of baseball, and I will miss it dearly.”

And really, it’s as if he never left.